Seawall Specials – Past and Present with Colin (Part 10) 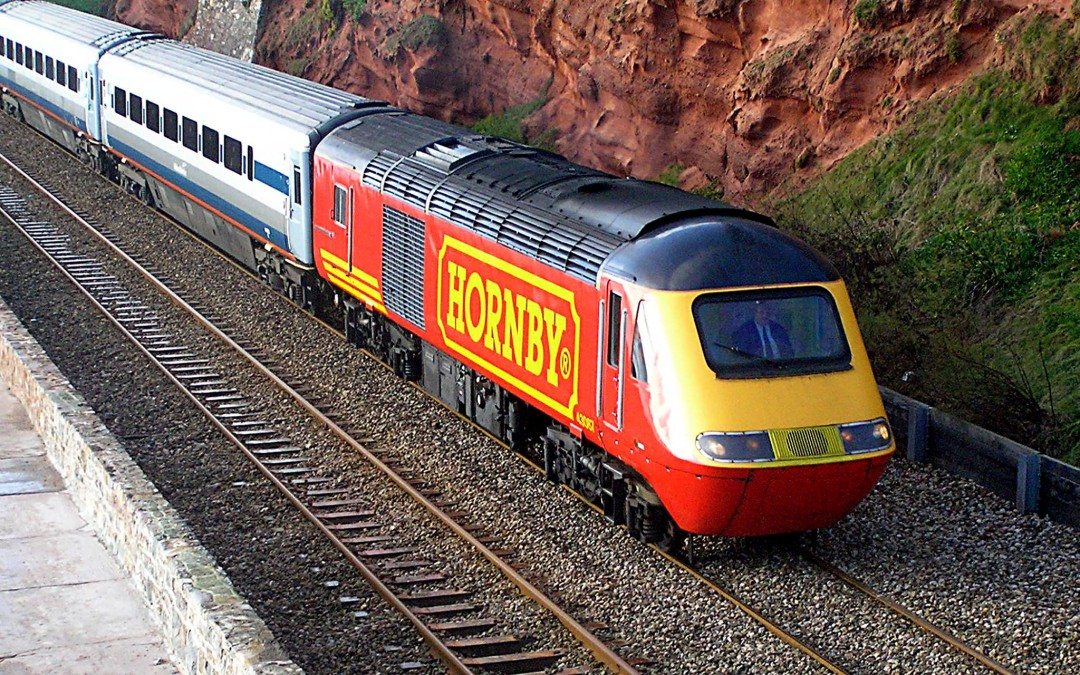 This week a look at the HST and it’s coat of many colours.

The High Speed Train was introduced in 1975 and has been an outstanding success and is still at the forefront of comfort, speed and reliability on the UK railways.

On introduction the livery was in blue and yellow and is seen here on this scan from a photograph taken where the railway comes onto the sea wall at Teignmouth in 1984, a view that has featured on many photographs in railway books and magazines.  The leading power car 43002 had recently been named “Top of the Pops” at Bristol Temple Meads by the now very infamous Jimmy Saville! 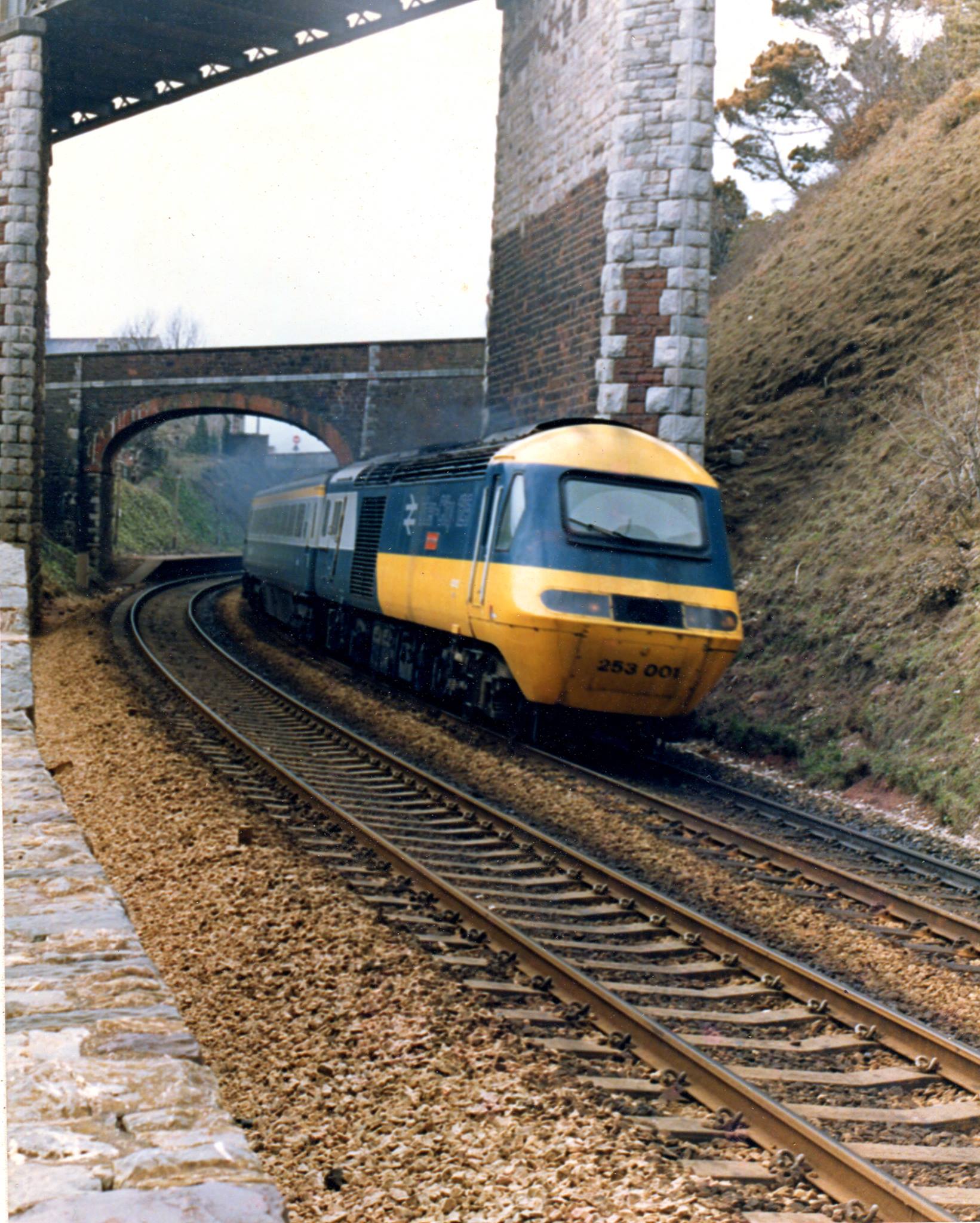 The livery can be seen better in this view of a HST in the original colour scheme heading into Teignmouth. 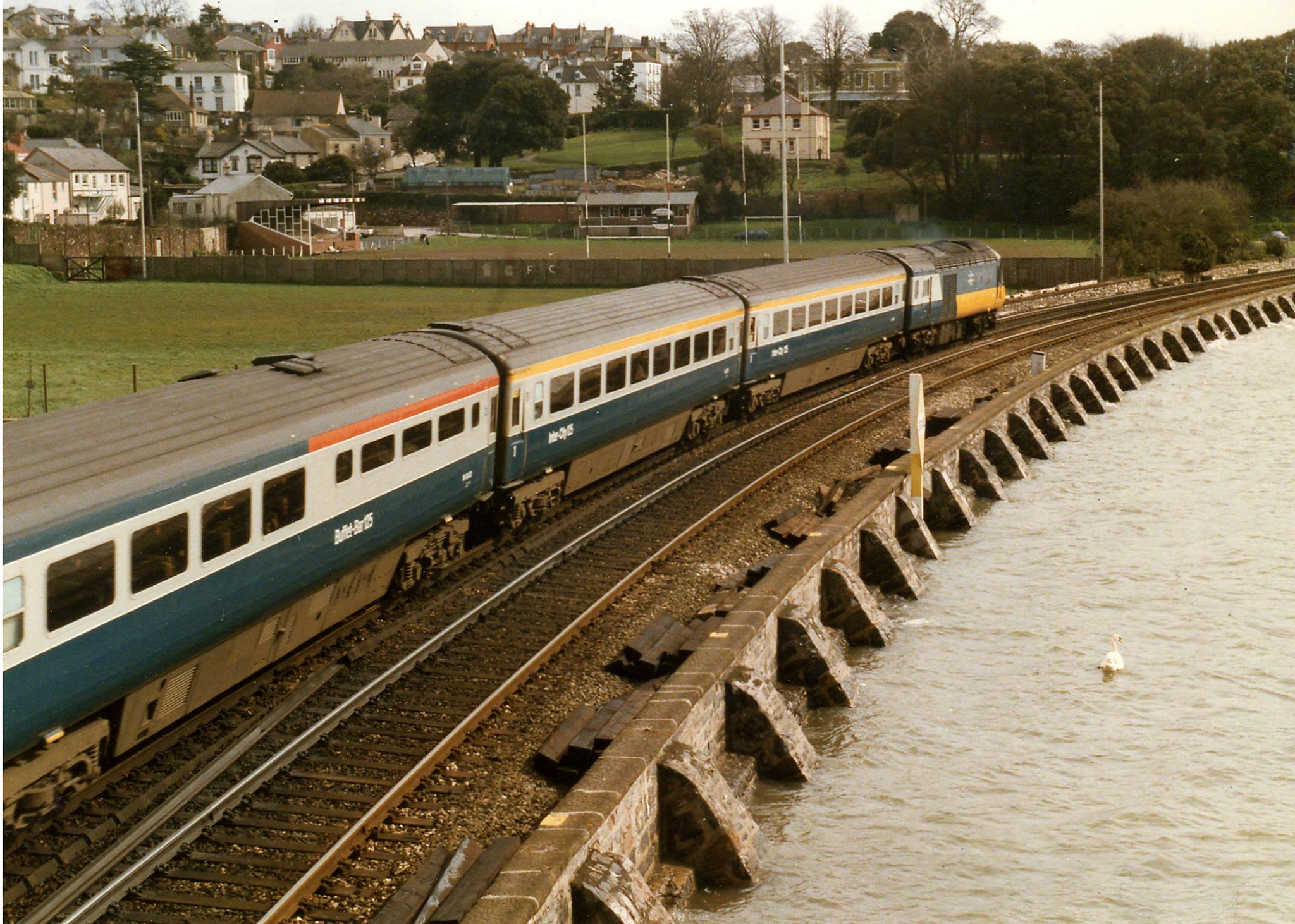 on it’s way to South Devon. 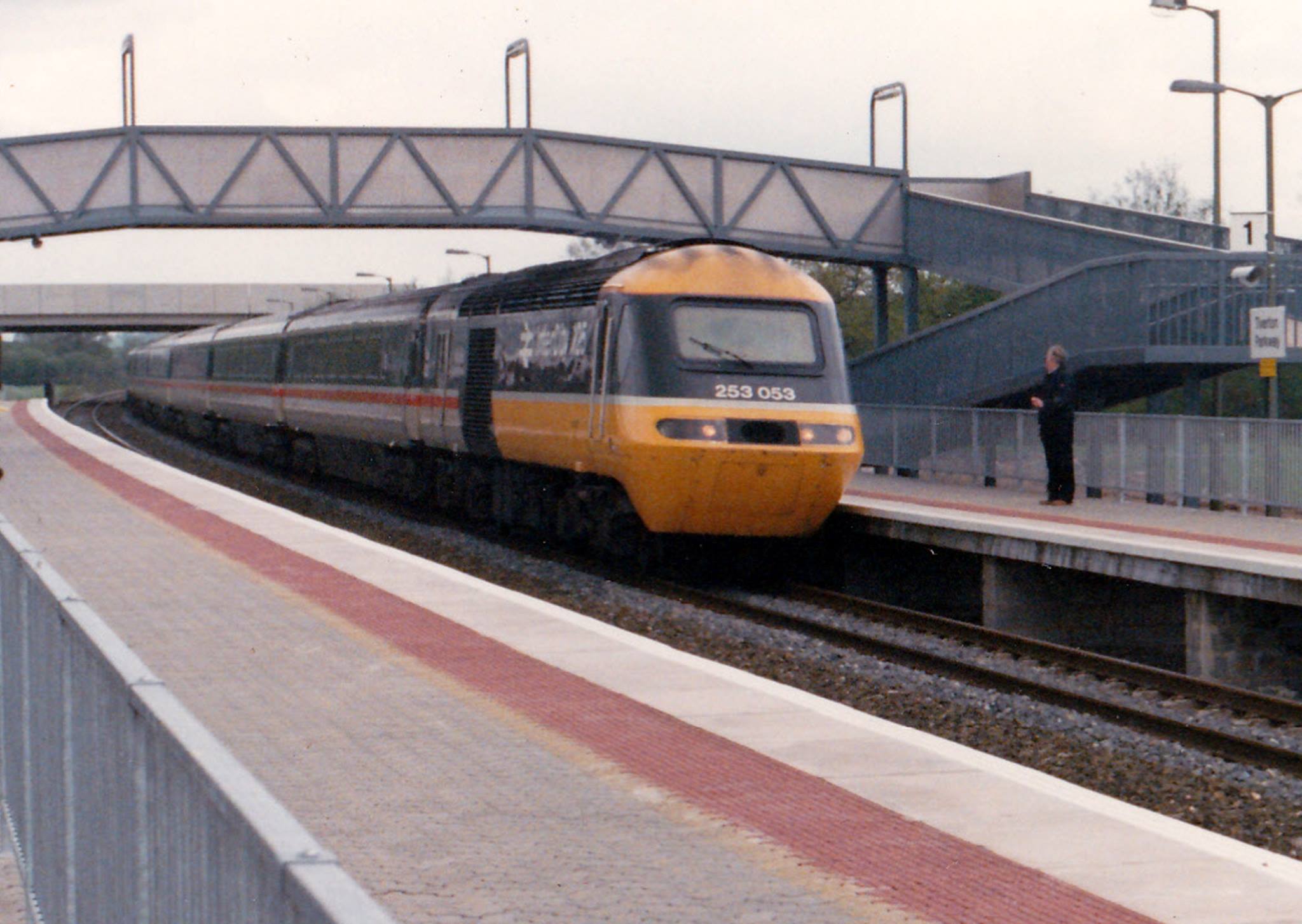 I have included this one as it shows the same coloured power car but with the yellow coloured side removed.

This must have been at the time of the changeover to privatisation as it is attached to a rake of Mk3 coaches in the Virgin livery.

It is passing the camping coaches which have been in the news lately concerning their impending demise.

It also shows the individual shop buildings which have now been swept away by new shops which to many has taken the character away from the resort. 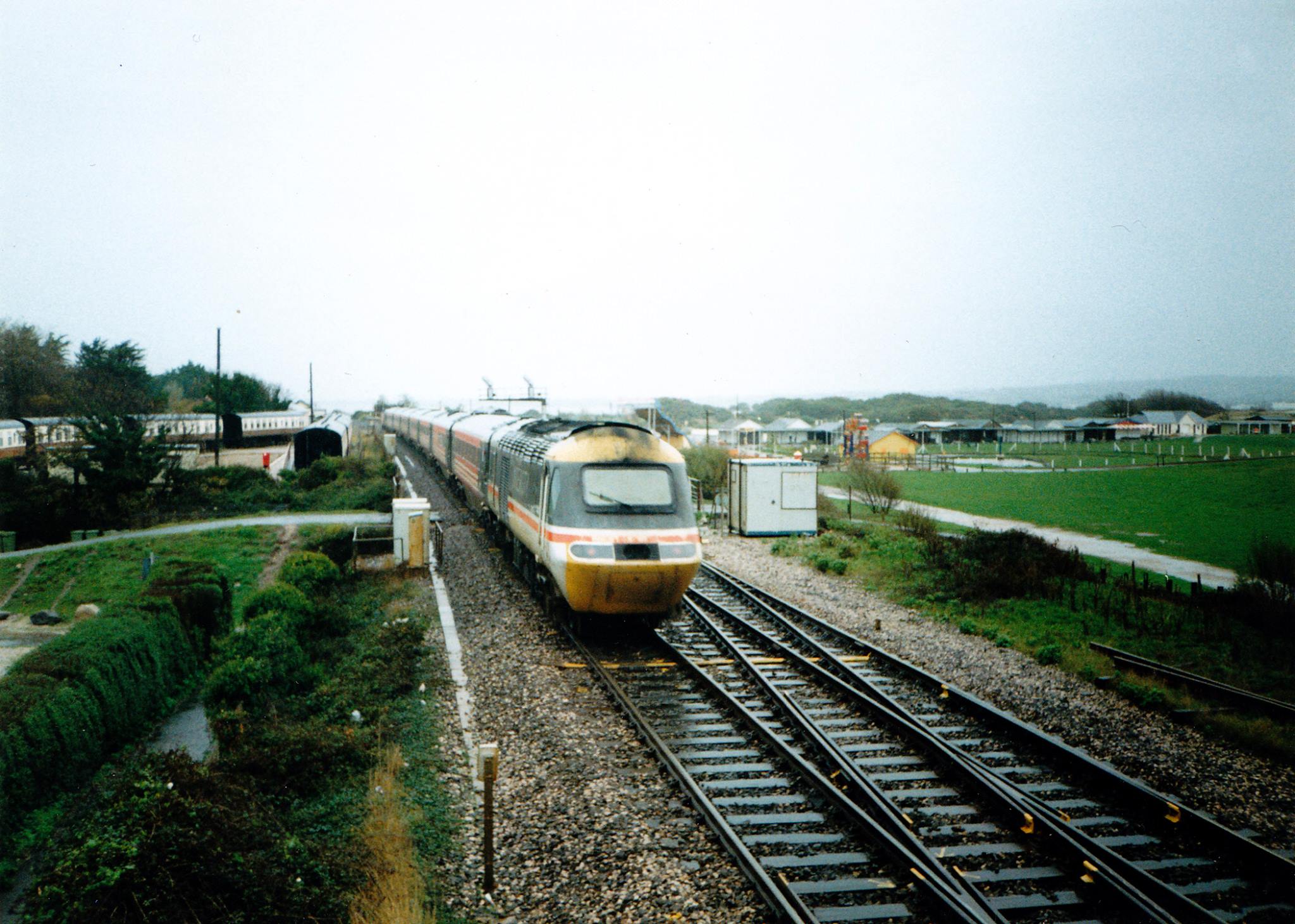 Next up was the relatively short lived “Merlin” livery which was a little more green than the reproduction of the photo shows. 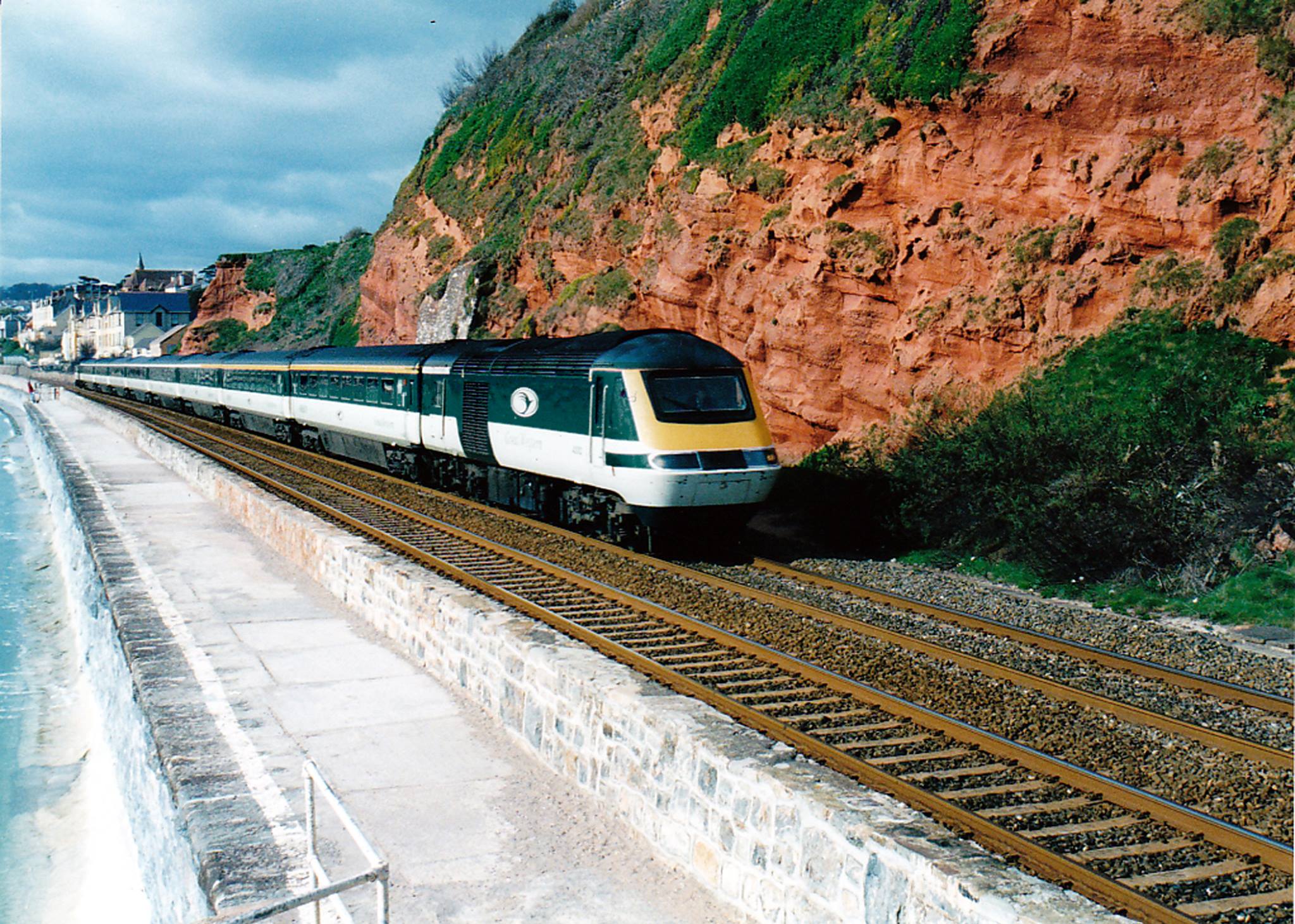 This was followed by the addition of gold stripes over the white panels nicknamed the “fag Packet livery before moving on to the “Barbie” livery variation before settling on the set below for all of the First Western fleet.

Thank goodness I can now move onto digital photographs as opposed to scanned colour pictures! 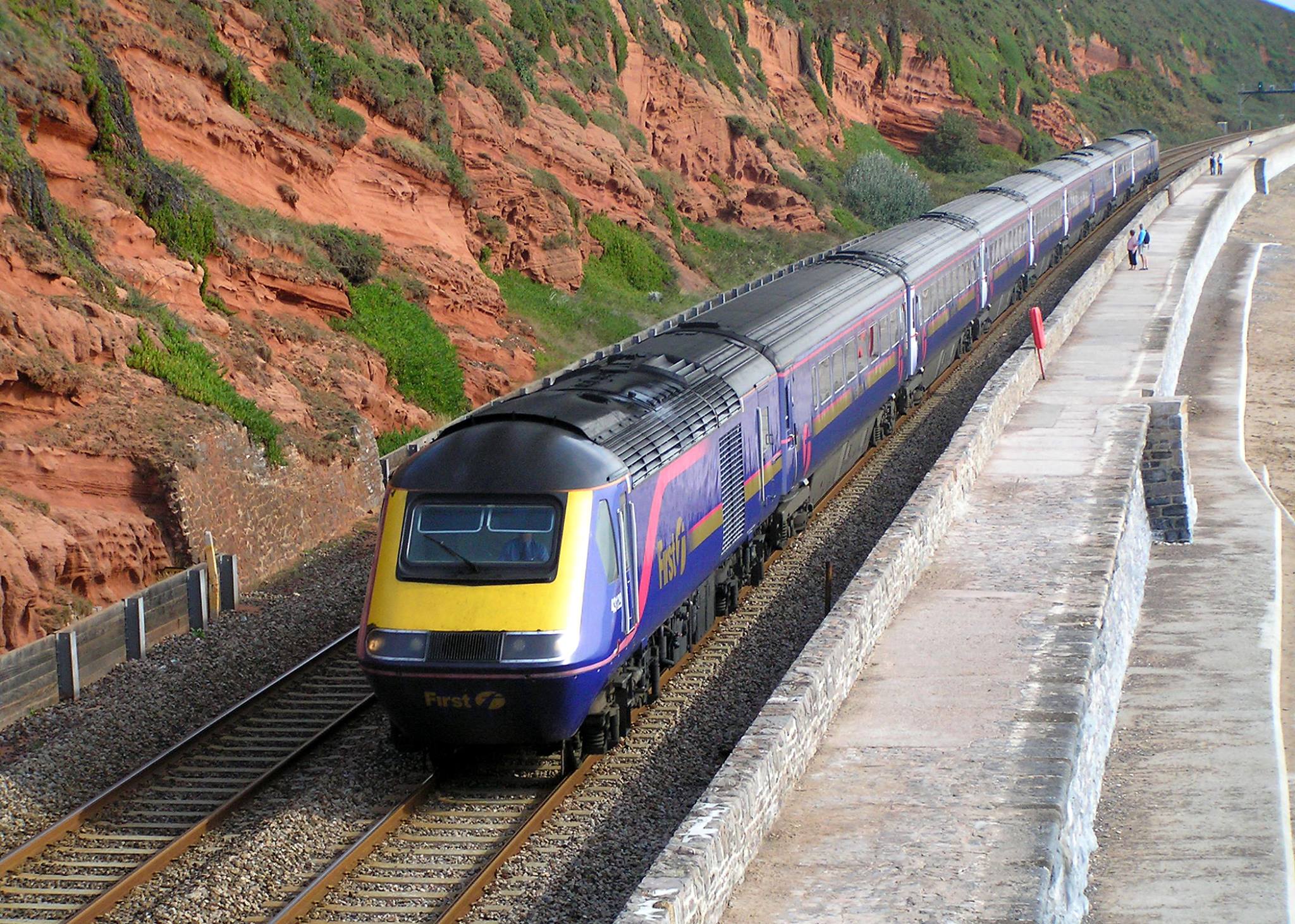 In 2006 another change was afoot when the Dynamic Lines were introduced. A short demo train came down to Plymouth seen here passing Cockwood harbour.

The lines on the power cars never materialised and the coaches ended up with the lines applied but with a plain dark blue finish throughout. 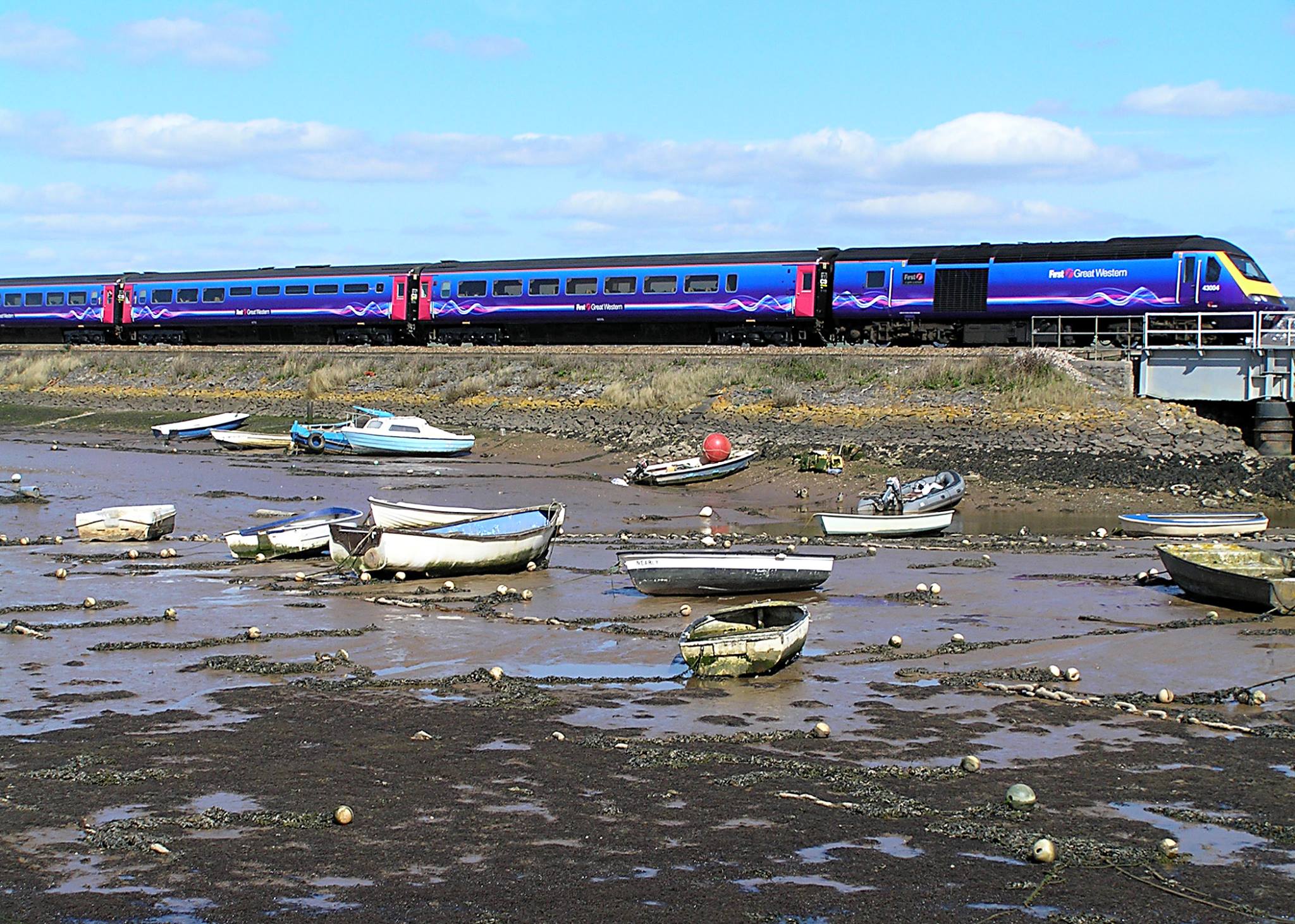 If GWR trains as they are now called are given the franchise in a couple of years the plan is to change to the dark green of the only HST set to be painted at present. 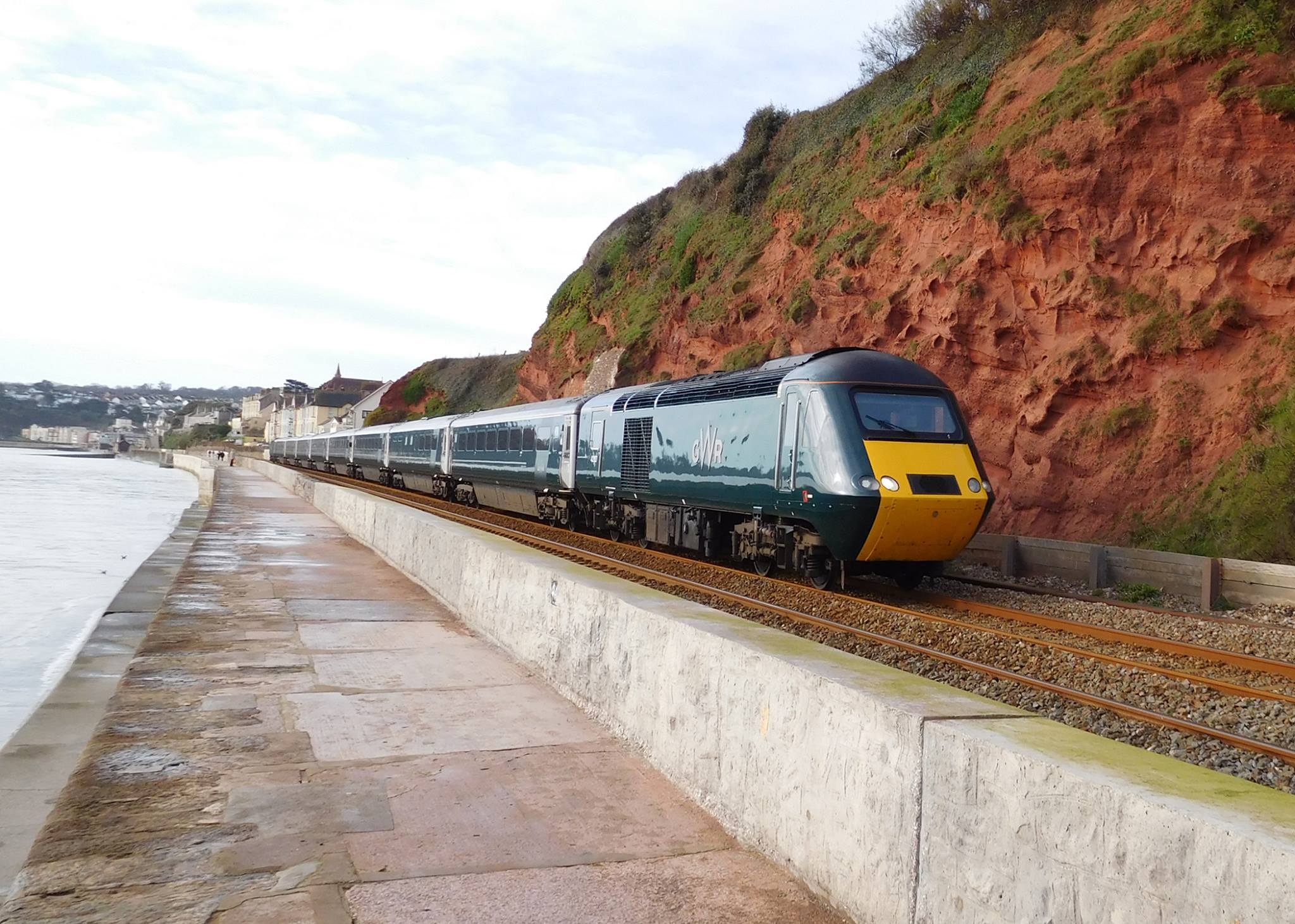 Throughout the years since privatisation many other companies HST’s have been seen along the sea wall.

The striking red, black with white stripes of the Virgin cross country sets is seen here as the train approaches Dawlish station where the sea wall walkway used to dip. 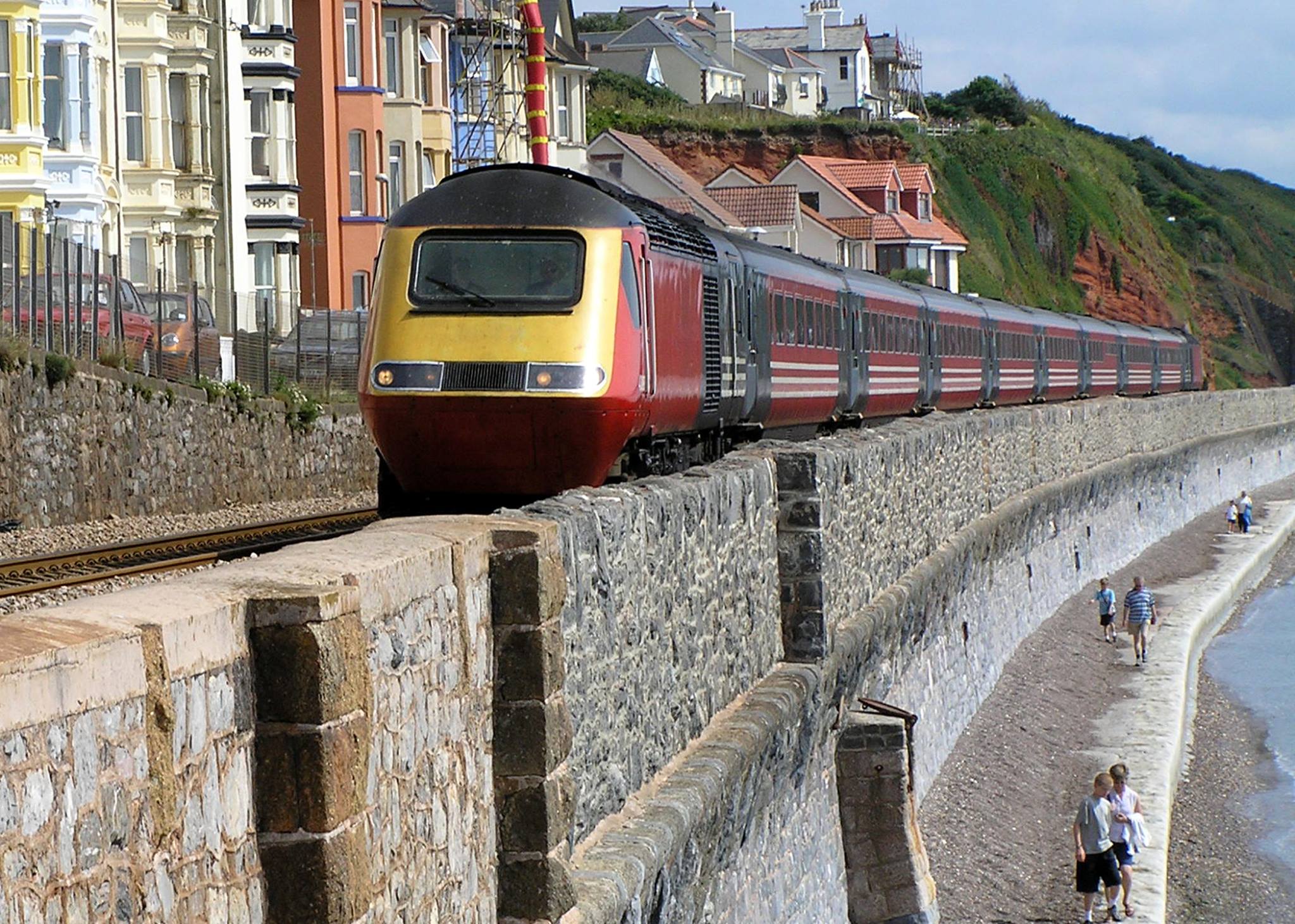 Virgin lost out to Cross Country Trains in 2007 and the fleet of Voyagers and HST were re liveried to a rather dull brownish maroon and two tone grey.

The HST  below is seen passing the Warren on a miserable wet November morning with the new shops mentioned earlier lurking in the background. 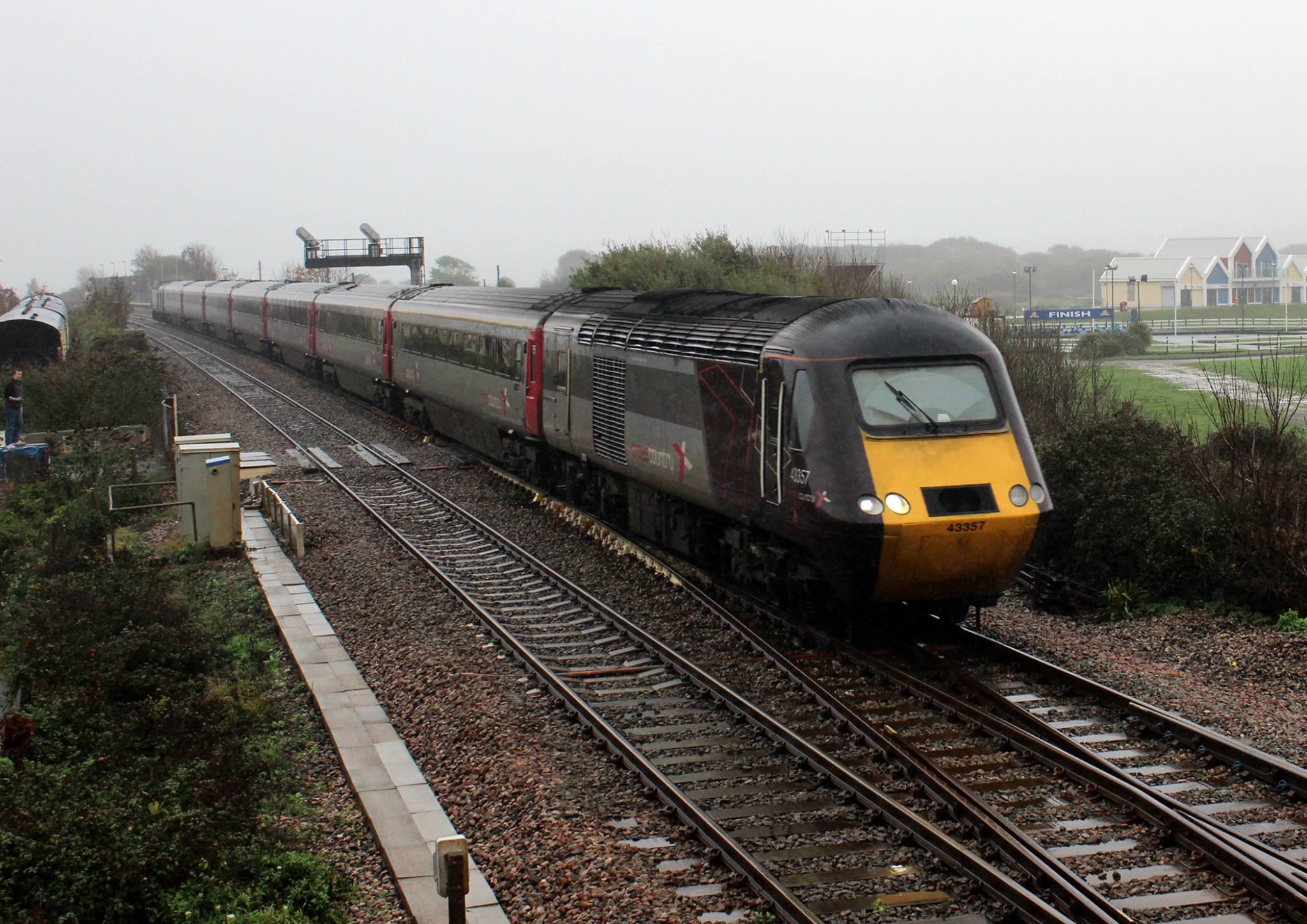 In summer, extra services are hired in for some cross country services. In the past we have seen GNER HST’s on summer Saturdays. 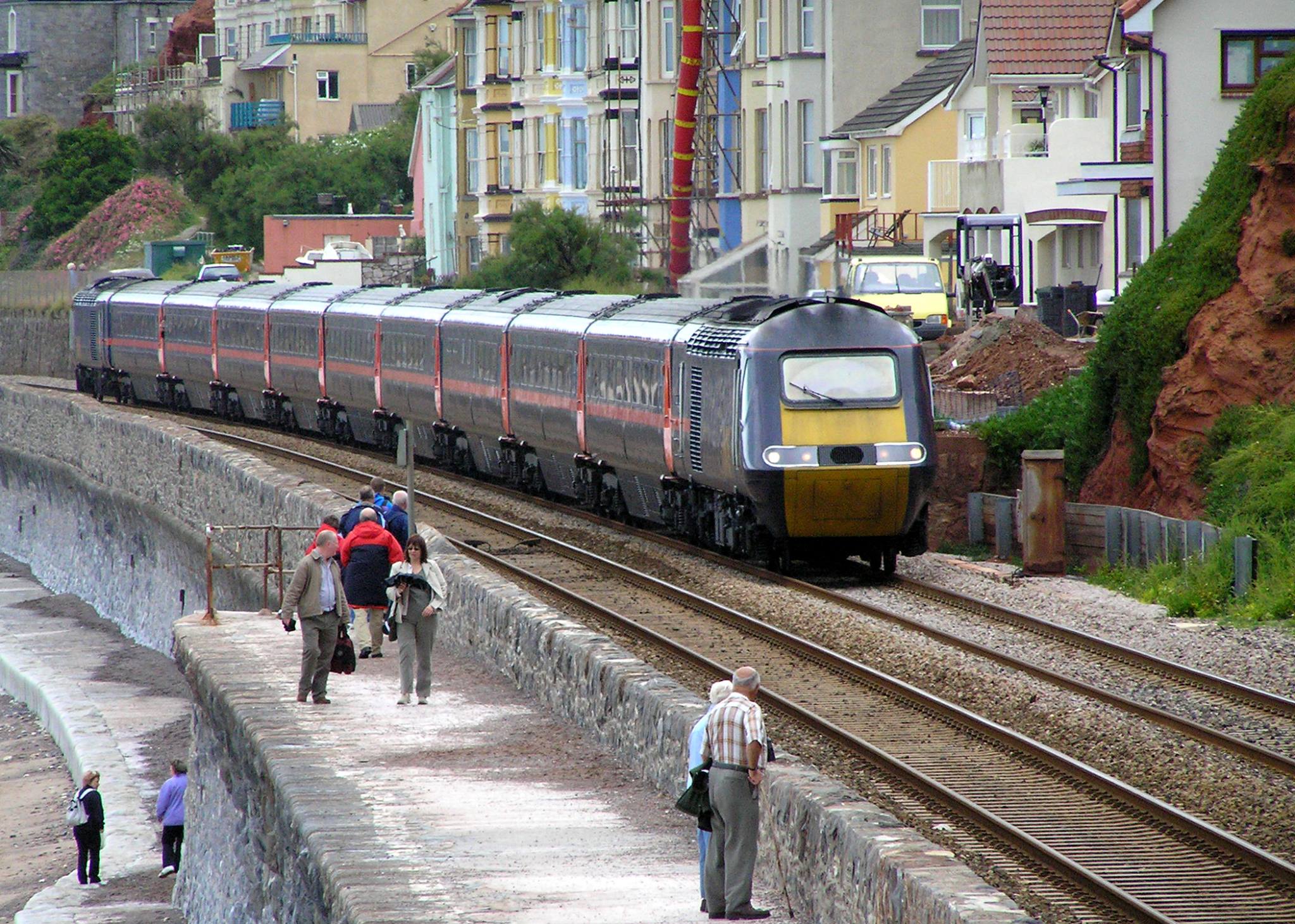 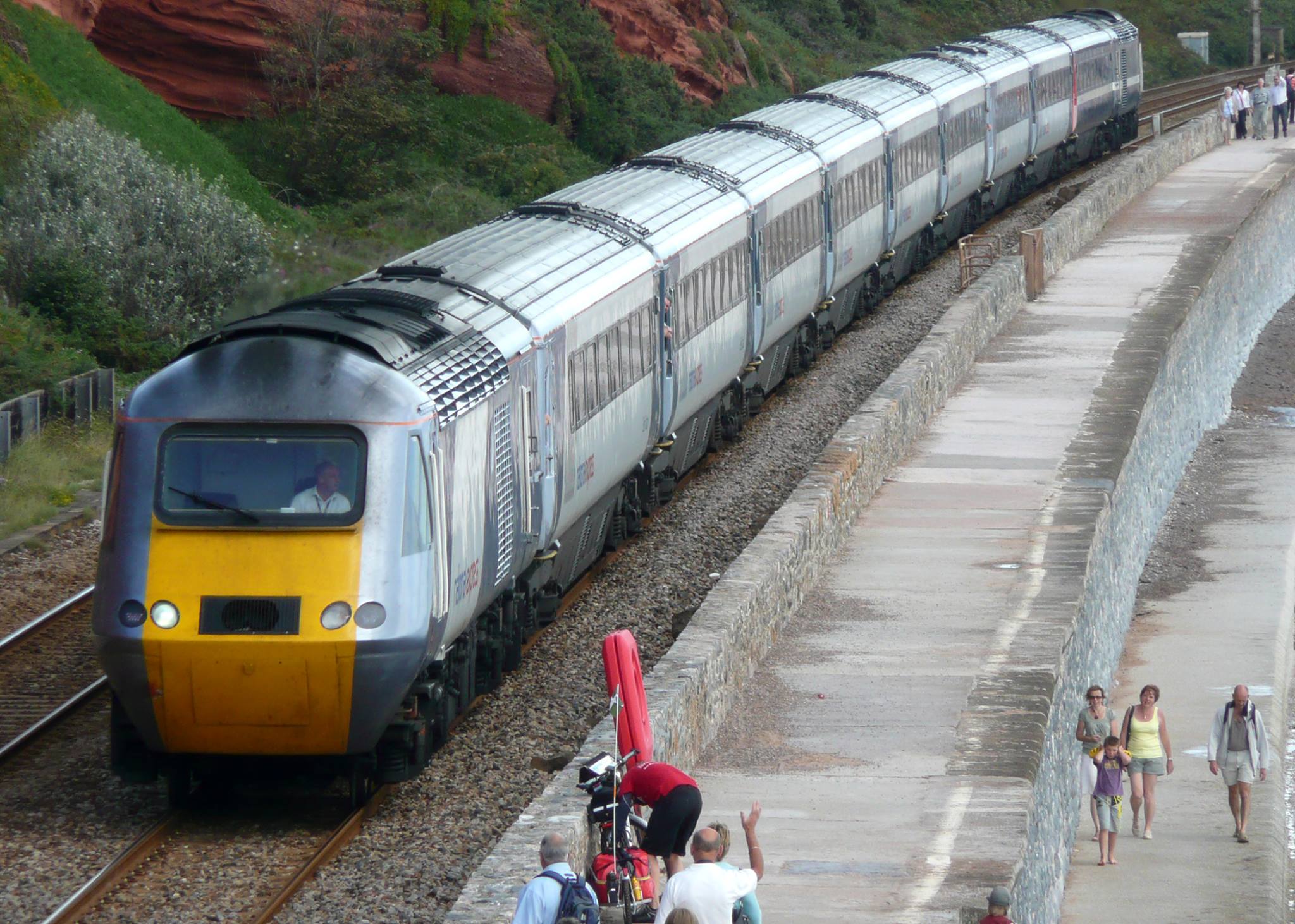 Midland Mainline HST’s have also appeared from time to time. 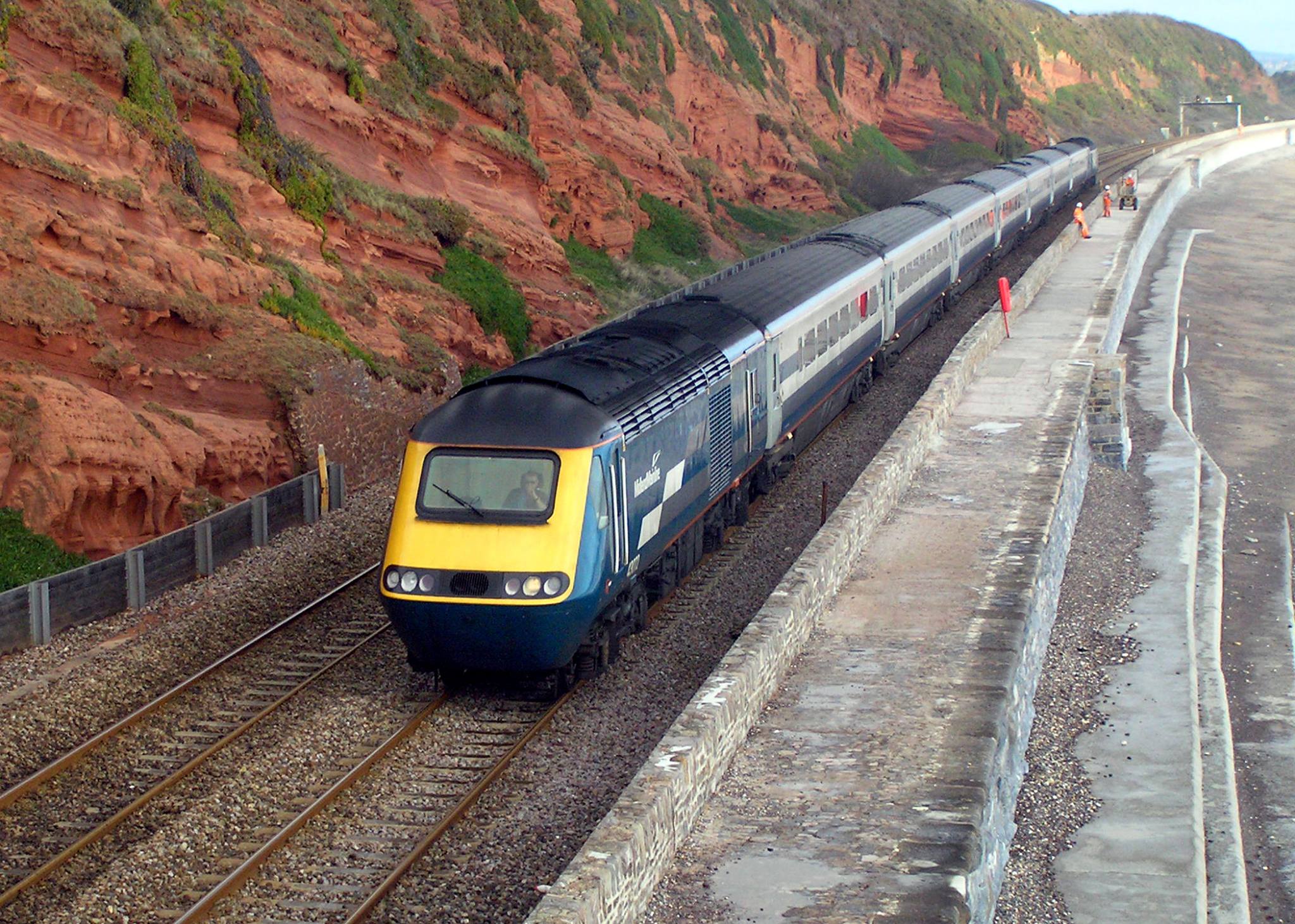 A relatively new type of advertising has seen vinyl’s applied to power cars and a selection follows. This first one was when Hornby trains produced a new model HST train set. 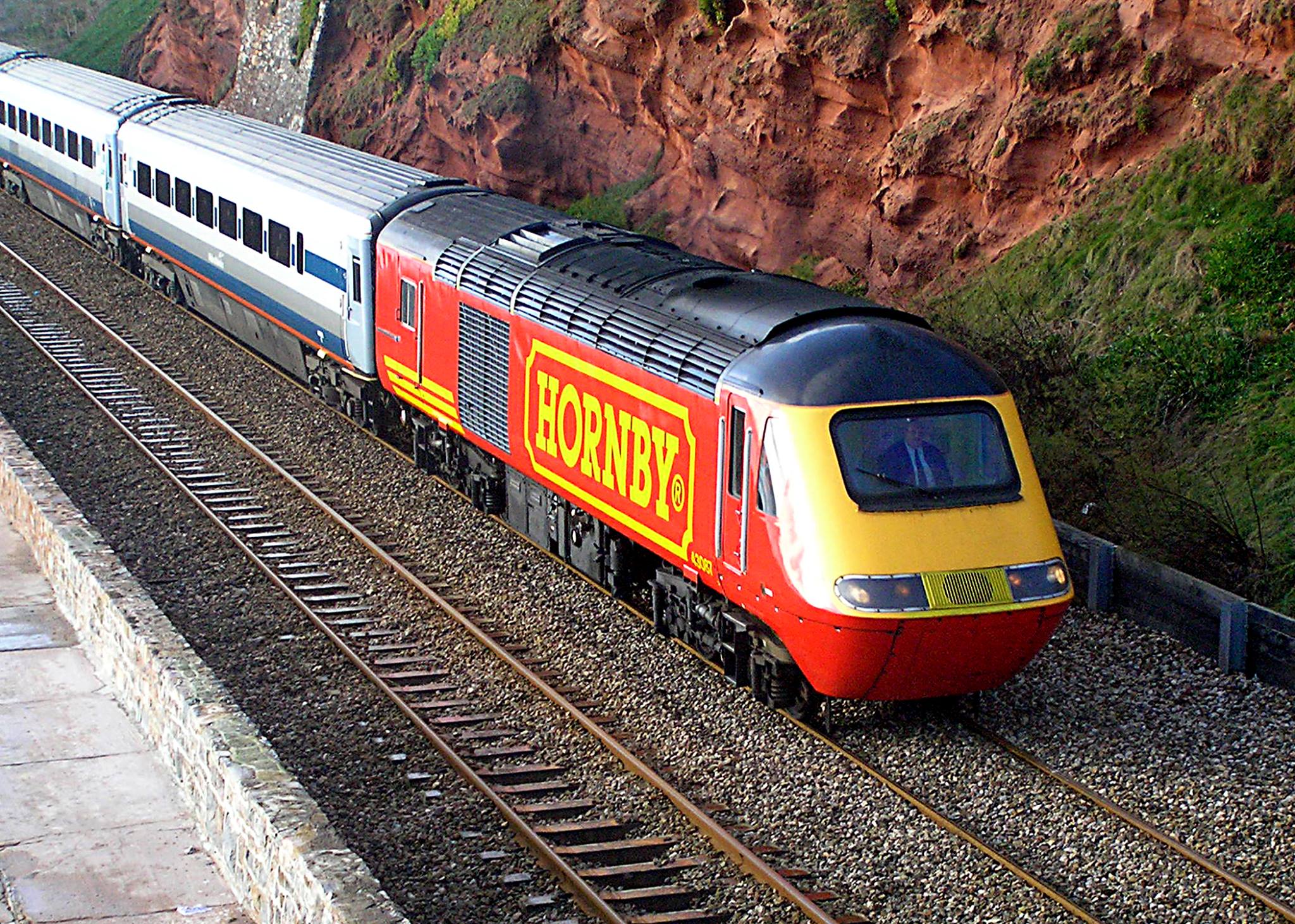 The rear end loco of the train led by Hornby was in Cotswold Rail’s colours. 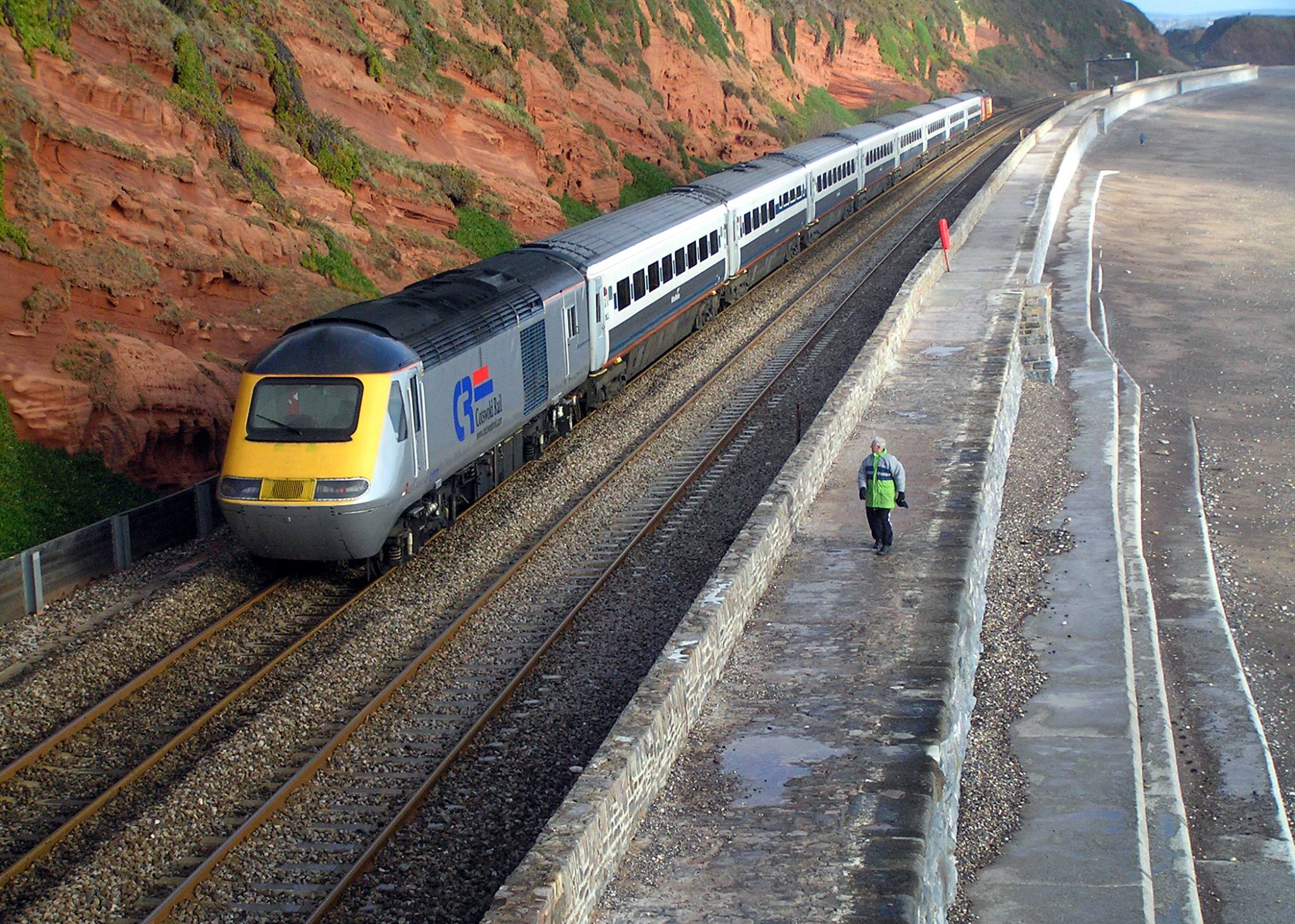 Hewlett Packard tried a bit of advertising in 2013 and certainly got noticed in the all over white vinyl’s. 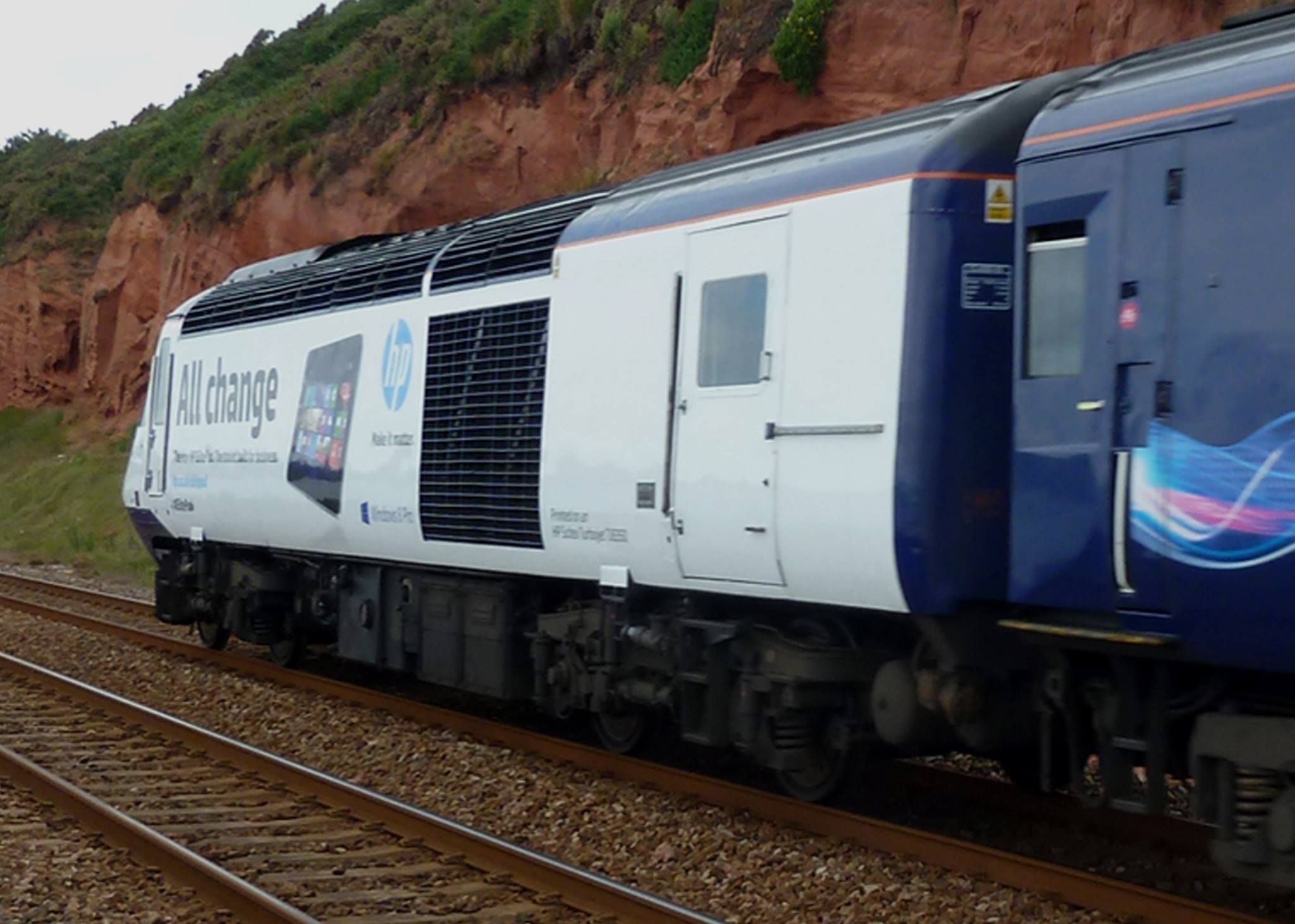 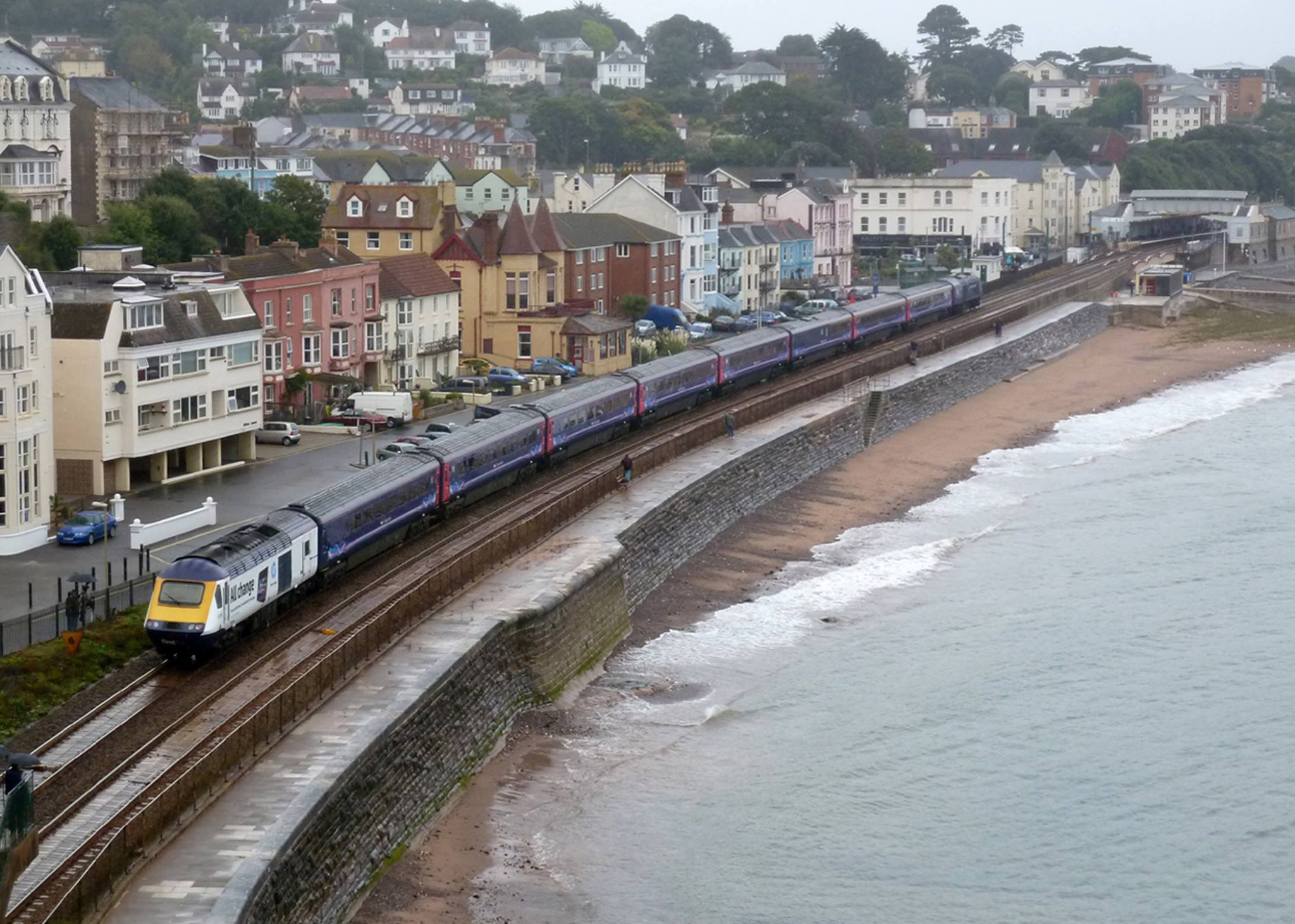 A tribute to the Queen adorned 43186 on her Diamond Jubilee 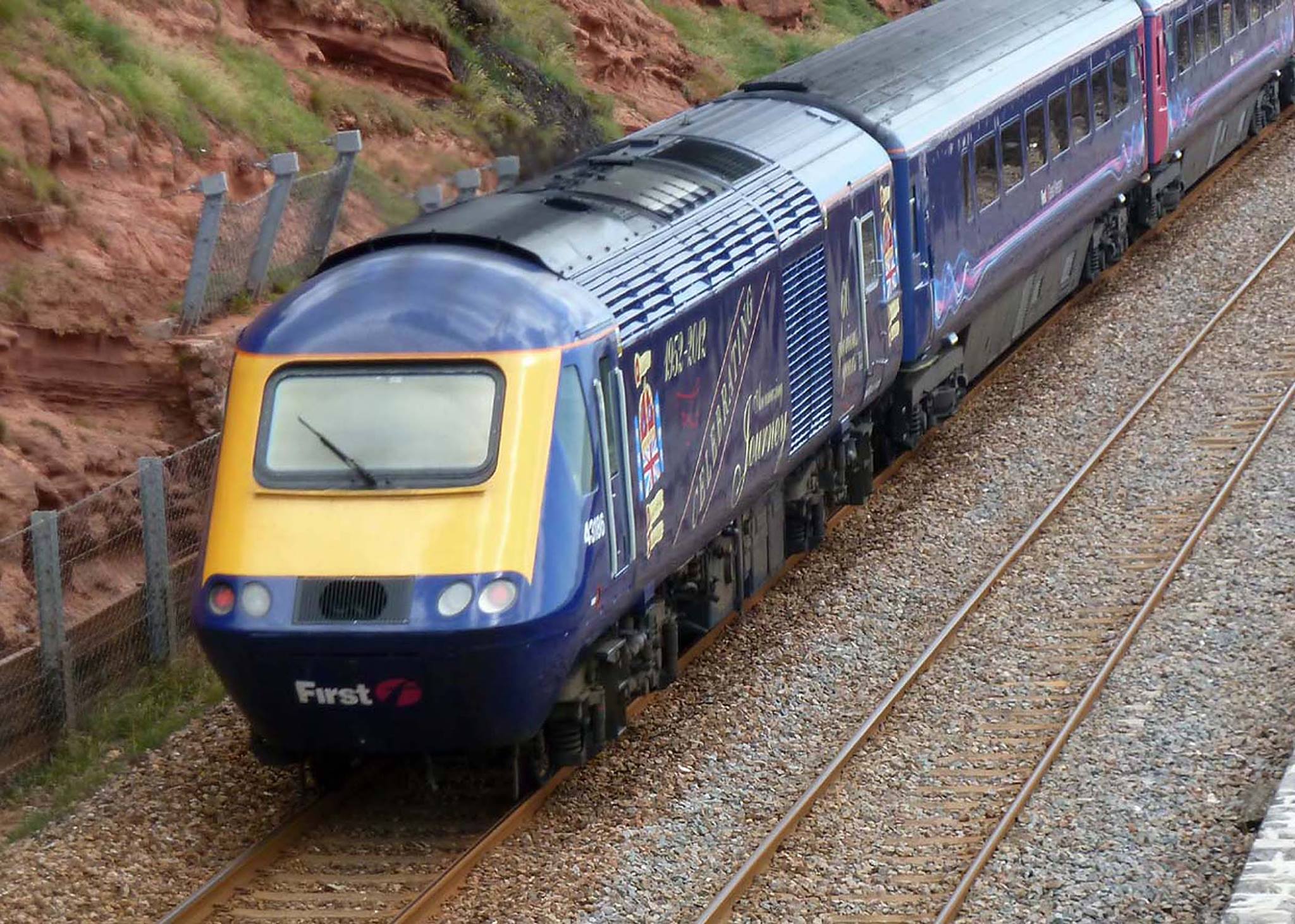 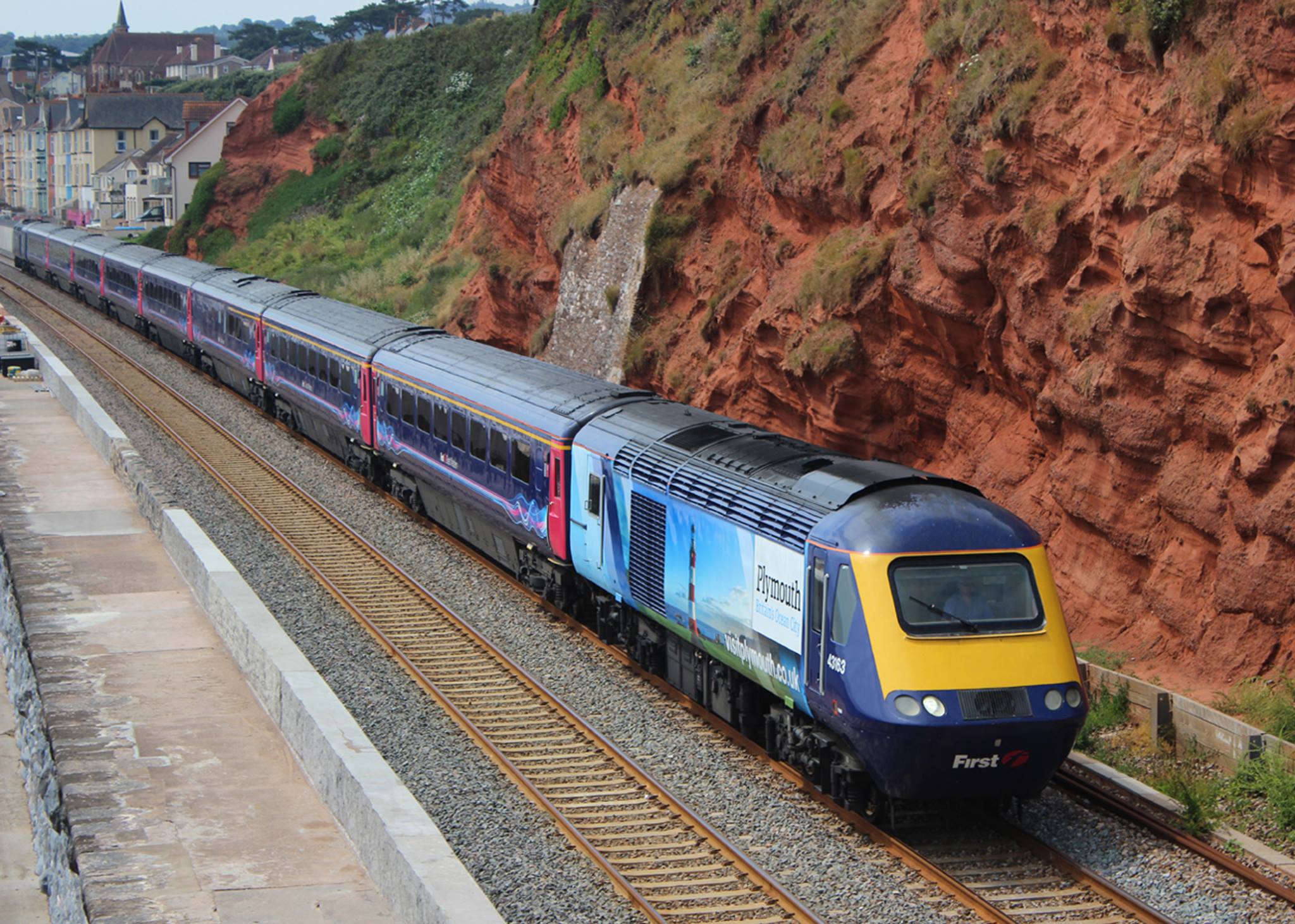 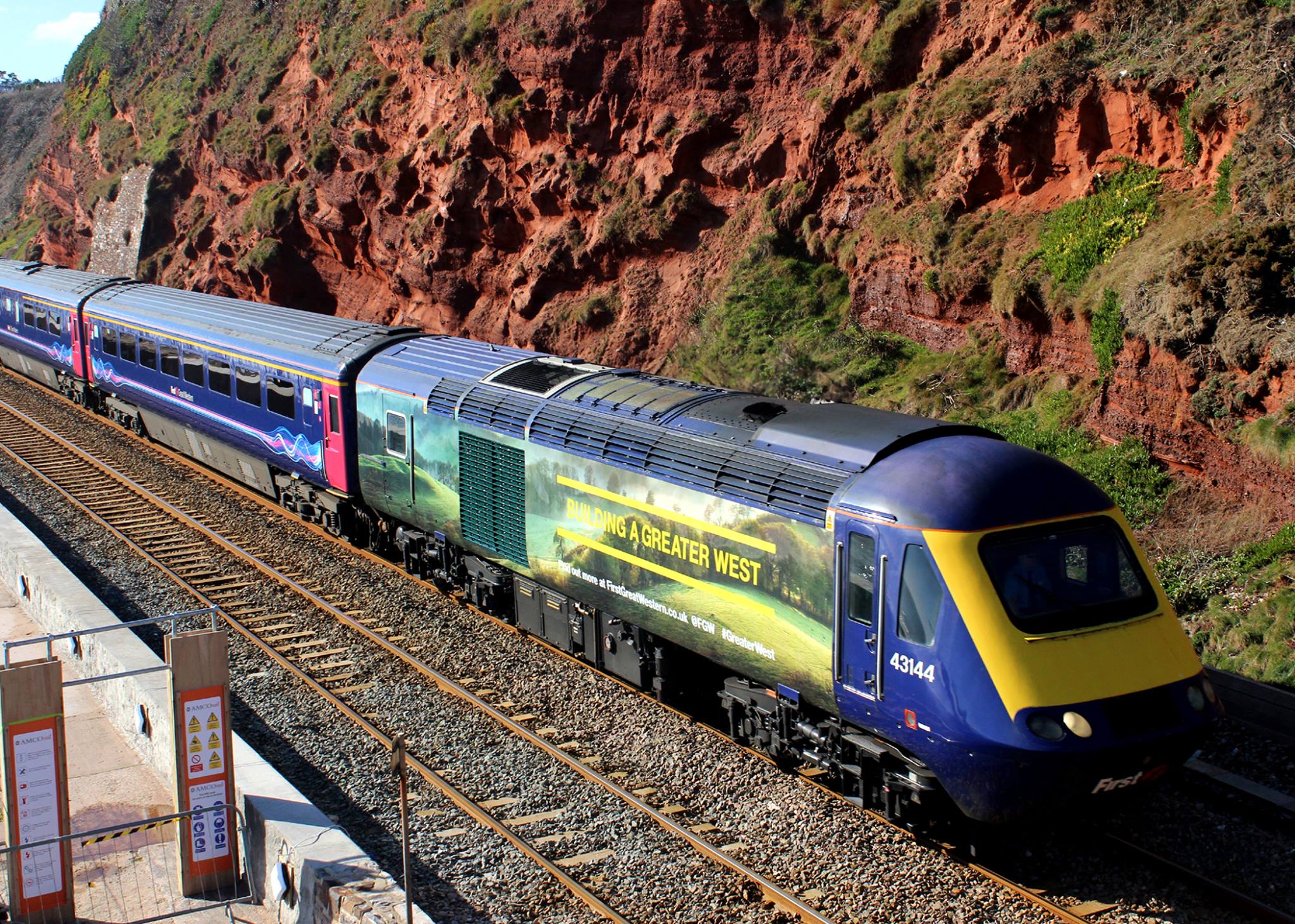 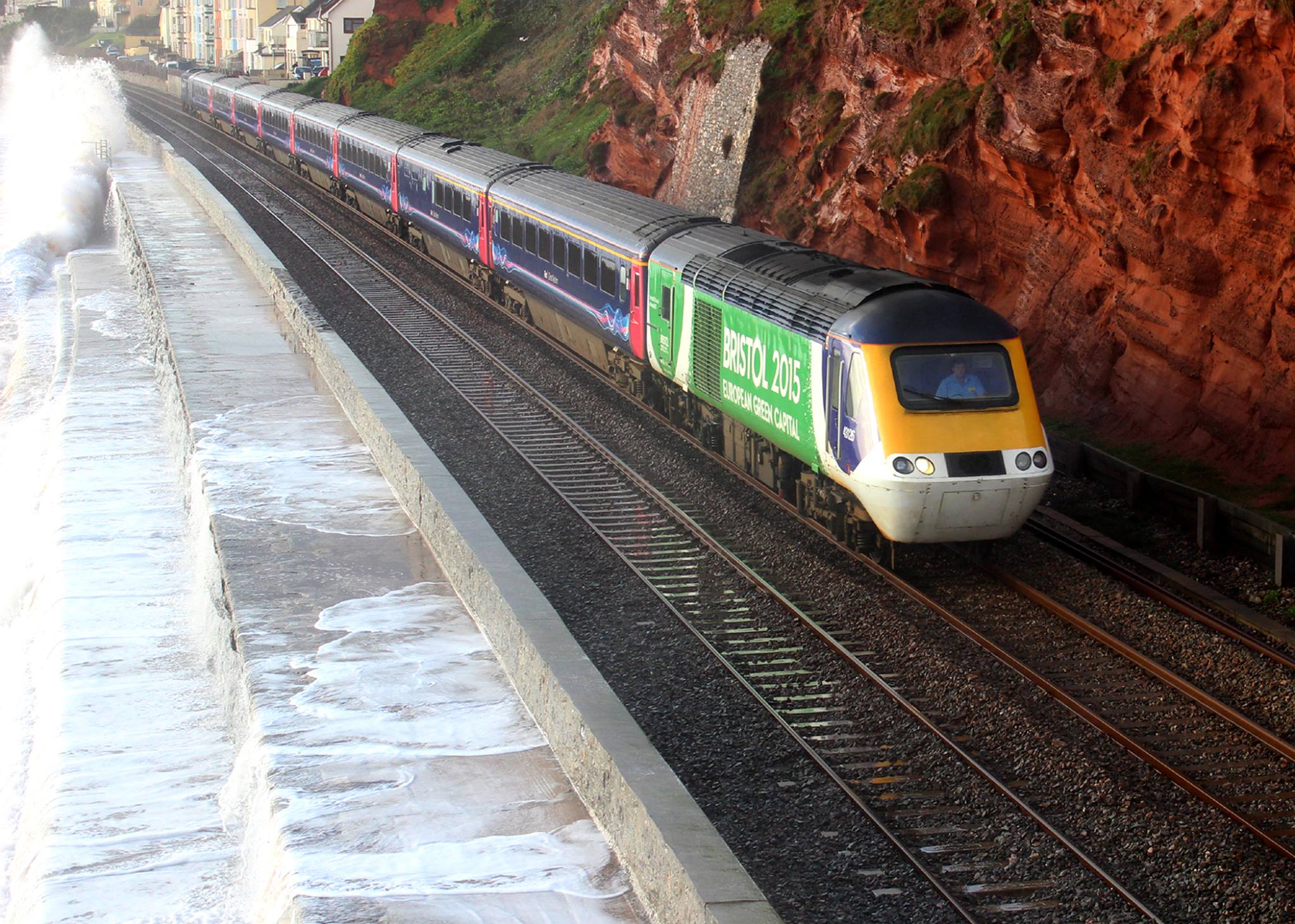 The remembrance Poppy bedecked “Harry Patch, the last survivor of the trenches” is very eye catching. Harry who was born in 1898 died in 2009 . 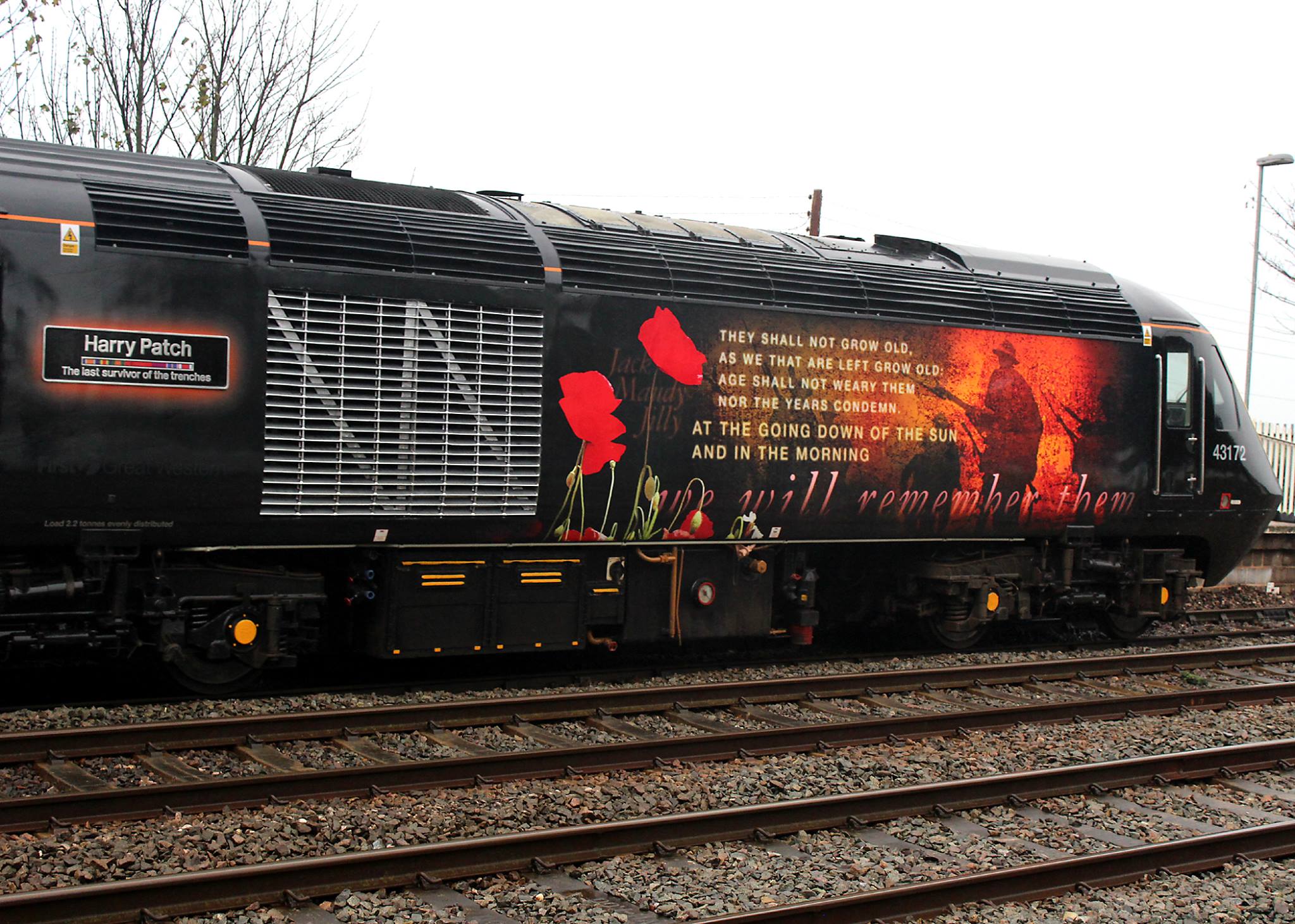 We mustn’t forget the NMT (New Measurement train) which makes fortnightly visits from London to Plymouth checking the track for the minutest of cracks and faults.

Amazingly this operates at up to 90mph. This first picture was taken in September 2005. 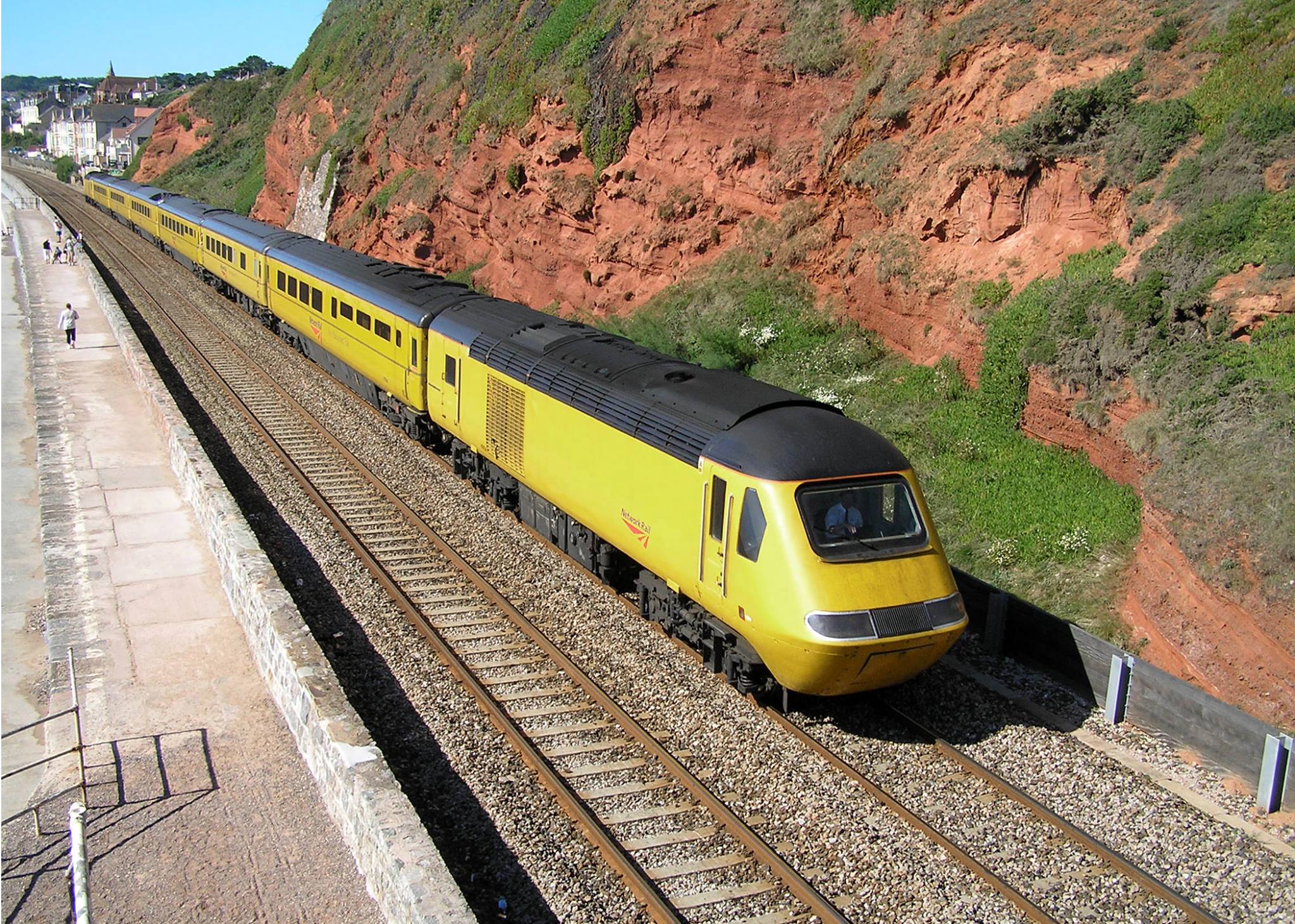 This picture showing the camera fitted. Note this power car has buffers. Dated May 2006 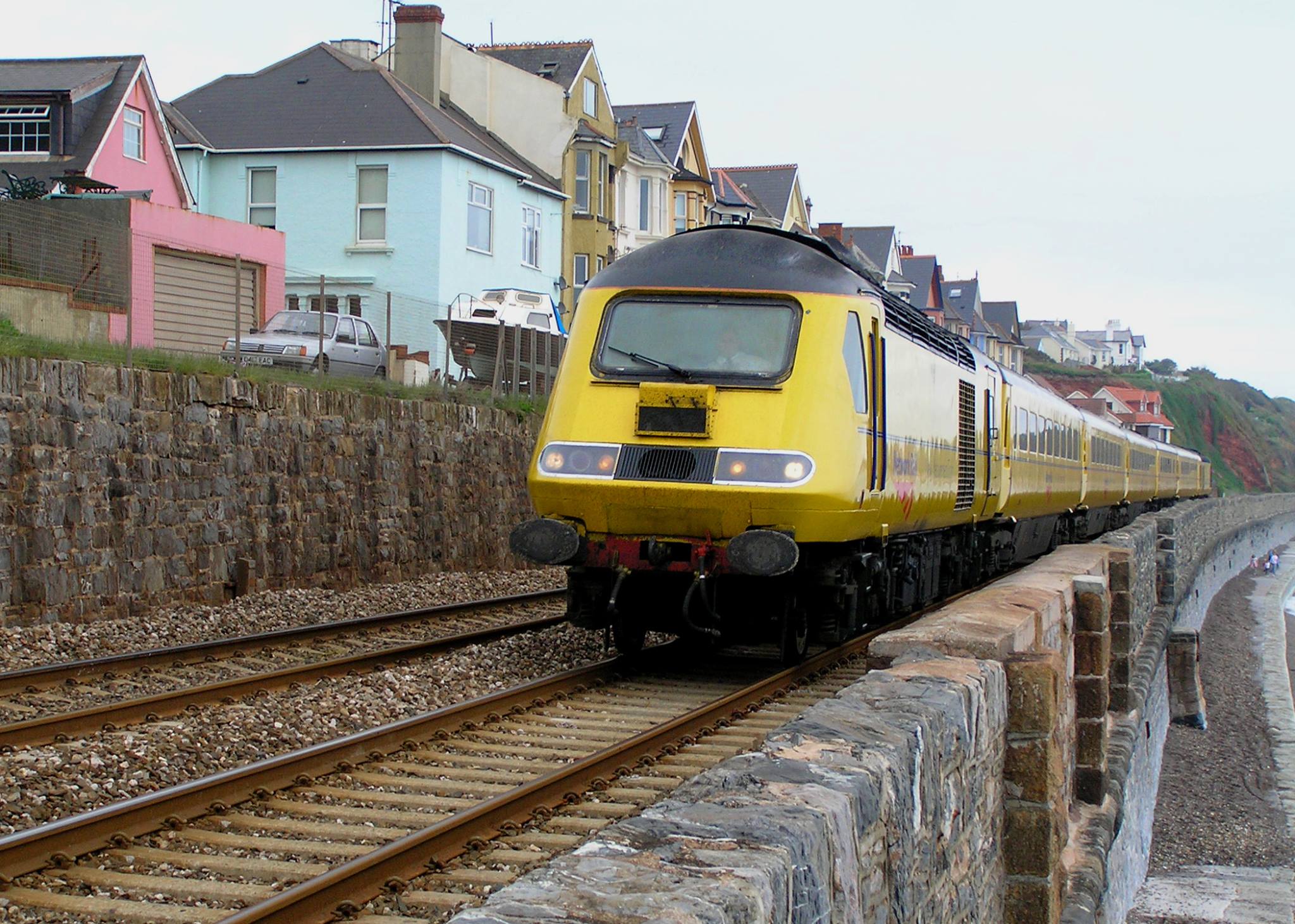