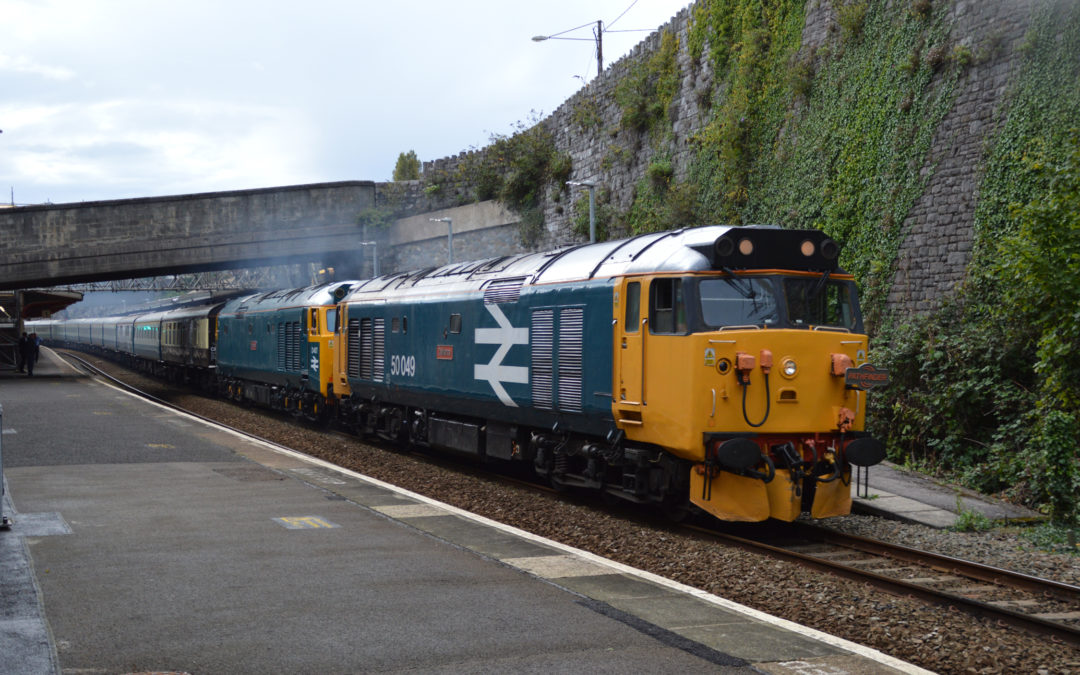 There are two special trains passing through Dawlish and Teignmouth this weekend. The first is tomorrow Saturday 23rd June and is “The Mazey Day Cornishman” rail tour from Tame Bridge Parkway near Birmingham to Penzance for the festival being held there. It will be hauled by two 2700HP Class 50 diesels with Royal Navy warship names double heading it’s sure to be a fine sight and sound.  The diesel electric class 50’s replaced the “Western” diesel hydraulic locomotives around 1974 when they were no longer needed in the north when the electrification of the west coast main line was completed. They were themselves replaced on the Great Western main lines by the introduction of the HST’s from 1976 and used on the Oxford line and the Southern route from Exeter to Waterloo before finally bowing out in the early 1990’s. No less than 18 have survived being scrapped and a small number are certified for main line use and several are in use on preserved railways. The tour is timed to pass through Dawlish in the morning at 10.05am  and the return run in the early evening at 7pm The tour is promoted by a new company this year called Saphos and the train is titled The English Riviera Express. Like the Torbay Express it runs from Bristol Temple Meads to Kingswear for Dartmouth and is timed to pass through Dawlish in the morning at 11.29am and 5.42pm on the return. There will be a repeat of this tour next Sunday 1st July.

Braunton entered service in November 1946 being built with an air smoothed casing and the valve gear driven by a chain that was totally enclosed in an oil bath and looked very different from how it does today. There were many problems with the design and from 1957 onwards sixty of the class were rebuilt with three sets of valve gear and the air smoothed casing removed. With the rapid demise of steam locomotives the rebuilding of the class came to an end. Braunton was rebuilt in February 1959 and withdrawn from service in October 1965.