Has faith in the Sea Wall gone out with the tide? Simon Rants! 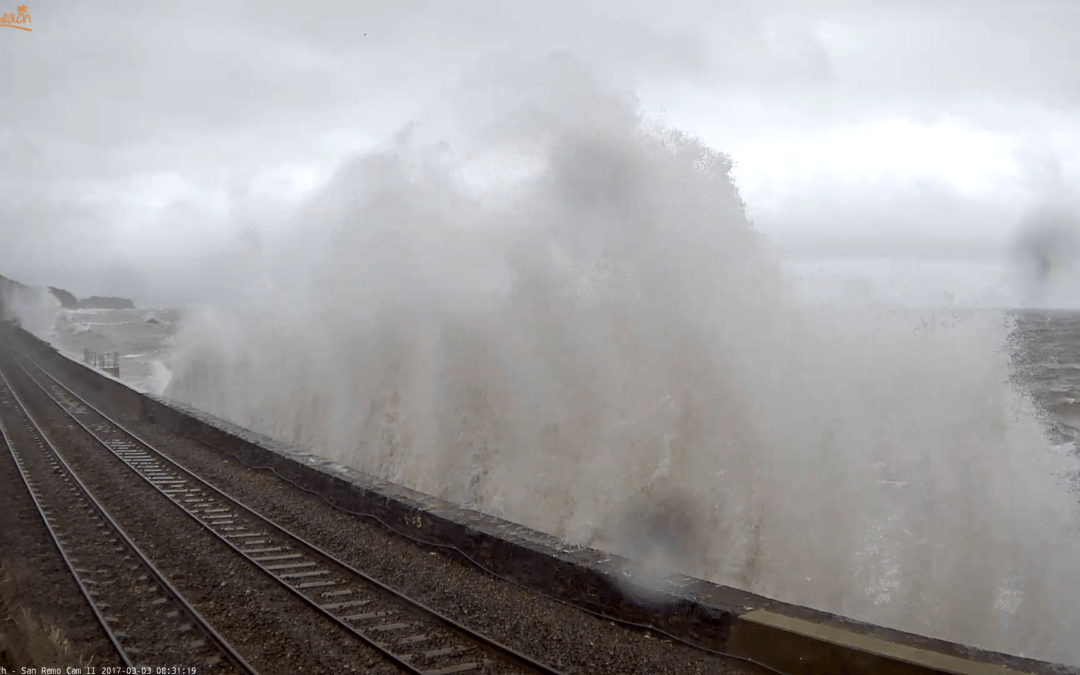 Ever since the storms of 2014 undermined the Sea Wall, causing the famous collapse into the sea, our famous wall has come under extra scrutiny and is now one of the hottest debates in the South West and Westminster. Used as a sensational story or a political hot potato we have experts throughout the Country and not just Devon and Cornwall screaming in panic with additional levels of spin for a good soundbite or extra coverage in the news feed. I have become exhausted in my efforts to research fact from fiction and report the daily occurrences affecting our patch in an accurate and balanced way whilst supporting Network Rail, GWR and Cross Country in their efforts to provide a reliable link to Torbay, Plymouth and Cornwall.

Since we began broadcasting in 2014 we have had an unrivaled and uninterrupted view of how the weather, tides and wind affect the line and the services operating on it. Some would say our accuracy in predicting from experience has made us experts on this subject! We have the benefit of a close up view without the need for waterproofs or risk by being there in person. Of course we can’t always be right. Nothing compares to a first hand report from a Driver or staff member travelling the entire route and they tend to be more experienced with the conditions than anyone. We have quite a few who regularly make contact with us to comment on what we share.

Now i’m afraid my rant begins! Those within certain agencies with a sensitive side STOP READING!!

I am frustrated and angry with the misinformation shared by news agencies and political figures and the selection of those they choose to interview or quote. This week we have had a storm. We average four storms per Winter. This may indeed turn out to be a worse than average Winter but the last few years have been problem free as far as operating a railway service on the wall was concerned. So, Why oh why do we get to this stage again when a closure for a few hours as a precaution rather than damage create the headlines of “Dawlish closed yet again!” and  “Something has to be done about the unreliability of this stretch of railway!”

Please get your facts right! Since 2014 the line has had a few hours closure twice. The first occasion, whilst the entire network closed down due to the effects of the Beast from the East combining with storm Emma, Dawlish closed for a few hours while railings were cleared from the line in front of Kennaway Tunnel and flooding in Dawlish station drained away. These were 70mph winds directly into our face and yet damage and disruption was minimal. The line was re-opened very quickly and certainly quicker than the unsensational flooding, landslides, damaged overhead lines and snow that paralysed the rest of the Country yet it was Dawlish that featured as the weak link on BBC Breakfast and in Newspapers. The second closure was a precaution by Network Rail on Wednesday. Strangely the precaution was announced very early the previous evening during worse weather conditions than those forecast for the following morning. As it was, Dawlish station did suffer from flooding for a short period but the remainder of the wall performed as it has for most of it’s 180 year life. It stood up, took it’s beating and protected the railway as always.

Is this to be a new policy from NR? Any wind over 40 mph with an Easterly influence and we’ll close rather than monitor? It’s certainly set a precedent and i am fully expecting to see an early closure call by lunchtime Friday. Time will tell.

So there we have it. Two closures but yet i watch the news and i hear the dreaded phrase, “Dawlish closed again!” I take part in an interview for radio and follow on from a man who claims Dawlish is closed 30 days a year! Can nobody get the facts first before causing panic and a belief that the railway is unusable for most of the winter? I exchanged words today with someone quoting the recent storm Callum damage and closure of Dawlish. He got his information from the news and took delight in telling me i was wrong and Dawlish was at fault again. Well the truth? A collapsed culvert at Bishopsteignton, NOT Dawlish, NOT Teignmouth and not even coast related. Power lines across the tracks near Plymouth, another few hours but NOT Dawlish although we had dozens of contacts asking what the problem was and if the railway was in the sea again.

Today i spoke to a representative of Network Rail and was hugely frustrated by the manner i was dismissed in. It was bordering on rudely aggressive and we were not big enough to warrant a little effort. I’ve never had this from any other member of the team. They have access to our live cameras, have always appreciated our efforts to support them, been courteous and given of their time as if we were old friends. What did i request that caused this reaction? I asked if someone could give me an accurate count of Dawlish specific closures since 2014. I was told sharply that they refused to waste time on something that wasn’t in the public interest. Well i know it’s two and wanted confirmation that’s all. Maybe some news agencies or Political heavyweight could ask the same question and see if they get the same response? OK we are small. We don’t broadcast to 10 million people and flash a ten year out of date picture of a Virgin train in front of people. We have in excess of 50,000 subscribers from 170 Countries, regularly have in excess of 1 million interactions per week and our top video was viewed over 1.2 million times. Actually maybe we aren’t that small!

A few comments have been made this week that this apparent change in policy is political. The early closure being made to draw attention to the summer revelation of the preferred resilience plan. Strangely enough by the end of Wednesday it had been stated that that statement would now be made in late spring. Suspicious? I asked and was shot down again. Not actually listening to the question i was asking, the answer was that politicians don’t make NR’s decisions and line closures were made from a safety assessment. Not what i actually asked but never mind, thanks for your time, i’ll go now.

Why do i ask these questions? Because you ask me and i have the numbers to ring.What frustrates me in this particular case is that you would have thought that NR would have welcomed some accurate and non sensational facts not fiction about the wall and the amazing efforts to keep it operating no matter what. But no, Thursday night saw more disruption and if you look at the twitter feed not a single mention of what was happening or what they were doing. GWR thankfully filled in the gaps and passengers were kept advised of the situation.

So to my current thoughts after the last few days. I am now very confused as to NR’s policy with safety on the wall. If they are now announcing closures 12 hours in advance rather than on current situations then do we expect “Dawlish closed again!” to become the correct headline? Do they have such little faith in the integrity of the wall that an inspection must be carried out after each storm tide? Do we begin to doubt the reassurance they have offered in recent years and worry about a collapse? Do we get on board with the inland route and say pour concrete on the tracks to save Dawlish? Do we agree with a causeway being built if the danger is now from tide and wind not cliffs?

I really don’t know the answers anymore. I welcome your comments and observations on the subject and will someone please please please tell the news agencies and politicians to report the truth and not fiction about the true situation.