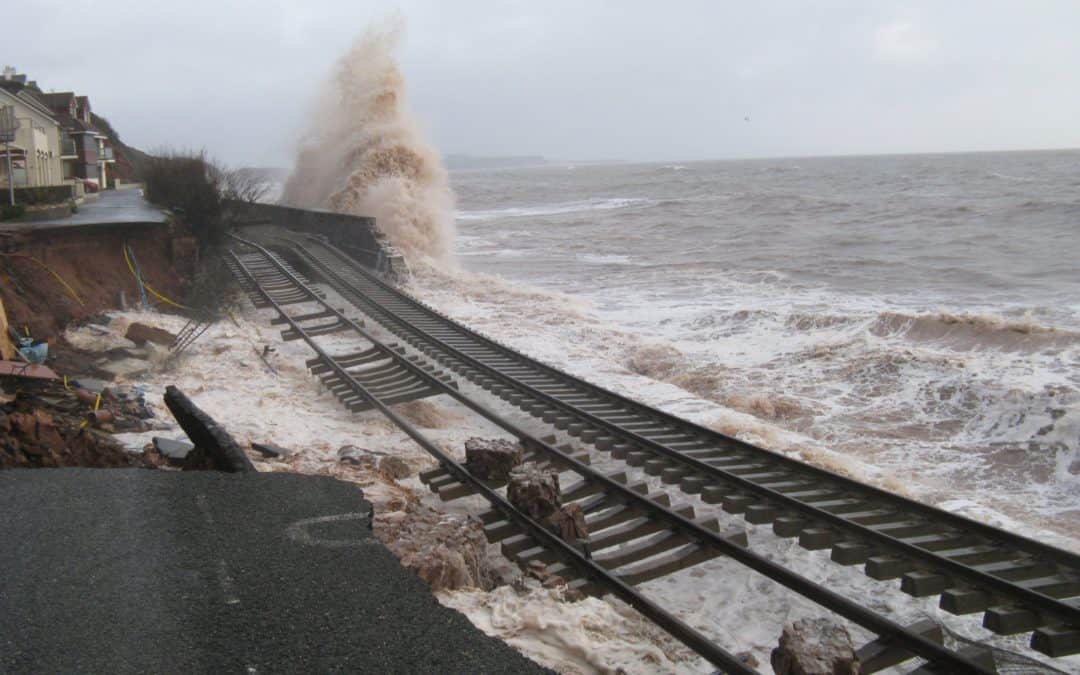 “It would only be under some extraordinary circumstances of high spring tides and very heavy gales that the water would even touch the wall of the railway. There is not, in my opinion, any ground for apprehension. A railway is not a work liable to any considerable damage by the beating of the water over it,even if such should in extraordinary cases occur. The most violent winds in the Channel are south and south-west, while east and south-east are the only ones that blow direct on this shore ” Isambard Kingdom Brunel during the original consultation on the coastal route. Even the great man could get things wrong.

The night of February 4th and day of the 5th 2014 has become an infamous date in the history of Dawlish and the railway. After a prolonged period of Easterly storms which began in the Autumn of 2013, the 175 year old famous granite wall gave way. The sand on the beach had been dragged out leaving a void beneath the most vulnerable stretch of wall and subsequently the track bed was sucked down and out in a catastrophic failure.

With gusts of 79 mph being recorded at Berry Head the South West was certainly facing the full force of this particular storm. We have had many such occasions in the past but this one really decided to head for our beautiful town with teeth bared enough to take a bite. The morning of February 5th 2014 when the level of damage could be seen properly for the first time.

The night’s events are well documented and will no doubt be appearing on our screens several times over the next few days. Around 9.30 pm when the storm was at it’s height, it was reported that the thinnest part of the wall had indeed been breached in a manner never witnessed in it’s history. The emergency services sprang into action and the residents of Sea Lawn Terrace and Riviera Terrace were evacuated to places of safety. For those residents at the far end beyond the breach this meant climbing the cliffs by ladder to escape. During the height of this storm and watching the protection in front vanishing, this was the only option and something that will remain in their minds forever.

By the morning sunrise the damage could be clearly seen. Those well shared images that brought Dawlish to the entire World. The mainline railway hanging like a washing line as the sea continued to take more chunks with each wave. The main line would take two months to reinstate with the cliffs between Holcombe and Teignmouth being an even bigger threat, but the final repairs were to take much longer with the wall not being open to public access until August 2015. The original Sea Lawn House owned by Mr Powell. Courtesy of David Force & Dawlish Museum. Notice how close to the railway the building is.

So what made the wall collapse at this particular location and why did we not see similar breaches elsewhere? To find the answer we need to go all the way back to the building of Brunel’s coastal railway. At this stage coastal properties used to have direct access to the beach. Permission and compensation  had to be agreed with the land owners and one in particular, Mr Powell of Sea Lawn House, proved to be a hard case to solve. Having moved to Dawlish from the midlands to escape the industrial revolution he was not keen on having a railway passing within feet of his house. At this point of course it was due to be an atmospheric railway and much quieter than steam locomotives. Clay tanks pass the original site of Sea Lawn House and showing the dropped footpath. This left this section with just 18 inches of protecting wall.

To secure his agreement he insisted that the sea side footpath along the wall would not grant the public a view into his private home. It was agreed that for this 200 yard section that the 8 foot public path would drop to a lower level and leave an 18 inch wall to support the railway. It was the only part of the wall to have this much weaker defence in place and it is why this particular stretch was always vulnerable. The fact that it lasted 175 years pays testament to the quality of the original build.

It is an irony that Mr Powell passed away before the railway was completed and so, was never disturbed by any aspect of the railway passing his home. In later years, Sea Lawn House actually became Dawlish Railway Station for a short period after a storm.

Once the main line was reinstated in April 2014, the rest of the securing work began. The sea Riser 4 arrived on scene, an offshore working platform with a huge crawler crane onboard. It looked like Dawlish was drilling for oil! The Sea Riser took delivery of “L” sections formed of reinforced concrete which were brought in by sea from Teignmouth. The work was slow and took months to achieve. Once the sections were in place the void was filled with yet more concrete to form a solid wall to protect against future storms. This is now regarded as the strongest part of the entire stretch from Dawlish warren to Teignmouth.

Since the completion of the works in 2015 very little seems to have been done. We have had a few more storms but none on the scale of 2014. Line closures due to weather have been extremely rare with 3 occurring during  2018 including the first ever pre-determined closure in November. In the 5 years we have had flooding in the station and railings washed across the line at Kennaway tunnel but little damage overall. As we approach the anniversary we expect Government to begin making announcements about Network Rails preferred choices for the resilience of the coastal line. The five years have proved to be an increasingly frustrating time to wait for both decisions and confirmed funding. Dawlish rope bridge railway. Note the wall at this part was only about 18 inches thick. Early stages of levelling out and putting in infrastructure to commence the rebuilding. Inspection of the first concrete spray. Notice the old tracks being used as part of the fill. Network Rail engineers are joined by David Cameron for a closer look. Drone view of the work between Holcombe and Teignmouth to wash away 20,000 tonnes of landslipped cliff. One of the biggest issues in re-opening the line was the 20,000 tonnes of landslip between Holcombe and Teignmouth. This remains much more of a threat than the sea. Debris being washed out to sea. NR called in the China Clay experts for advice. Mid stage of repairs shows the shipping containers used as a temporary barrier and the extensive draining being installed. “L” sections being brought in by sea The Sea Riser as viewed from Riviera Terrace during repairs Sea Riser 4 and the new “L” sections in place before the concrete pour. The “L” sections being lifted into place by the Sea Riser View from the beach beside the Sea Riser platform. You van also see the repairs to the parapet wall with reinforced concrete replacing the original Granite construction.

The reinforced “L” sections in place and waiting for the void to be filled with more concrete. The Sea Riser taking some of the “L” sections coming by rail this time. “L” sections being secured onto the original low level footpath Almost ready to re-open. The Tamper can be seen in the distance to level the track and secure ballast. One of the many Road Railers that were used. Seen here levelling the ballast before the Tamper makes it’s pass. August 2015 and the Orange Army bid us farewell in their own unique style!

Our thanks to David Force, Dawlish Museum and Network Rail for some of the material used.

Find out more of the history of Dawlish with David’s book. Click the book to take a look.