Funding announcement for new sea wall made by Minister for Transport 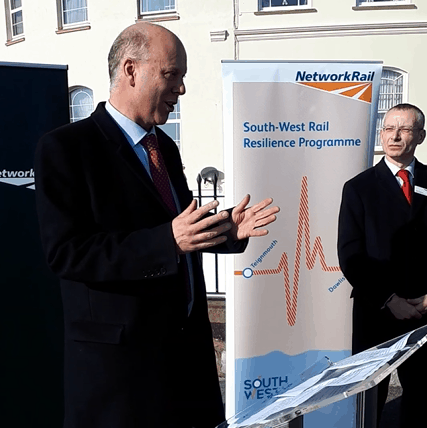 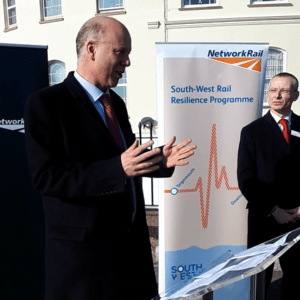 Speaking to a crowd of media he announced a package of funding worth £80 Million to  begin rebuilding the iconic sea wall within a matter of weeks. The first section to be commenced will be from Collanade Viaduct to Boat Cove and will provide a wider, higher, stronger and safer wall to see the line protected for the next 100 years.

Along with Mark Langman, Route managing director, Network Rail West, they explained how the £15 Million investigation was still going on as far as the section between Holcombe and Teignmouth was concerned but the work on Dawlish could now begin. Phase 1 will commence this spring, break for the summer holiday season during July and August, restart in September and be completed by Christmas.

Phase 2 will take in the section from Collanade Viaduct to an expected completion around Rockstone Bridge. These plans have not yet been finalised and involve working around Dawlish station and it’s listed building status. Those improvements are likely to commence in spring 2020 and will take around one year to complete.

Mr Grayling further stated that the preferred option decision for the remaining tunnel and cliff sections towards Teignmouth should be announced in the summer months.

You can listen to the Minister for Transport and Mark Langman here https://www.dawlishbeach.com/2019/02/secretary-of-state-for-transport-chris-graylings-visit-to-dawlish/?fbclid=IwAR1mlgDsVxaTTfawtrIeWciJANVN1uwylqYXu5_gkYoo_QFzOv_2gF5nk4Y

So what does this mean for Dawlish, The Railway and the all important connection to Plymouth and Cornwall?

The face of Dawlish is changing forever. After 180 years of Brunel’s famous granite built wall protecting the railway against the winter easterly storms we are getting a new one. Building over and infront of the existing structure, there will be no more granite on view. Those millions of photographs of trains on the sea wall that currently exist will be confined to the history books. The character, atmosphere and heritage of Dawlish, which gives it that unique status, will be hidden behind freshly poured concrete and there is little that anyone can do to alter it. 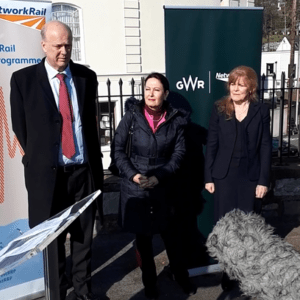 It’s not all bad news though. What the new wall will provide is a commitment to the route for the next 100 years. It will also provide a much safer environment for those walking along the path with a long overdue barrier as opposed to a sheer drop onto the beach. There is a serious question about the design though. With the addition of that protected pedestrian area do we have a risk of a Dawlish canal appearing? We already know how much debris is lifted onto the path currently. Deep sand is a common obstacle for those using the footpath. Will that debris block any drainage back to the sea? With the plans for the footpath section showing it raised above the height of the trackbed what will happen? Do we have a wall either side creating the canal possibility or does that excess water flow across the track itself and into Marine Parade?

The design is a complex and difficult one to get right and Network Rail tried their very best to make this inevitable upgrade sympathetic to Dawlish residents and visitors whilst having to secure protection for the railway itself. Once the decision was made to upgrade the wall for future resilience we knew that it would mean big changes. The designs and plans have been created by World leading experts in their specific fields and it’s all too easy to find a few negatives to complain about. Sadly it has to be done for the future of the south west and not just for Dawlish. 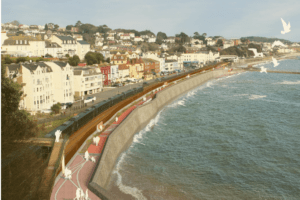 The full plans and impact statements are available to view at Teignbridge District Council. Those plans will happen. This is not a normal planning application as Network Rail have permitted development rights. This means that there is very little the planning department can do to enforce any conditions on Network Rail. However, Network Rail have conducted a number of consultation sessions and communication with local residents and concerned parties will continue throughout the process. They have taken concerns and have fed those back into the plans to achieve the best possible outcome for all.

Some concerns raised include

The Railway connection to Plymouth and Cornwall.

The implementation of the resilience plans is designed to protect the railway for the next 100 years. The threat from global warming and higher sea levels has been a major driving force behind the raising of the wall height. The prediction of increased severe storm events by respected authorities have forced many hands into throwing their cards into the resilience pot. Network Rail can not allow a similar event to 2014 happen again.

The plans are about prevention and that needs to be considered. The loss of around a billion pounds to the south west economy will dictate the investment from Government. Dawlish was not the only contributor during the 2014 closure. The Somerset marshes have long been an area of concern, as was Cowley near Exeter. The works to improve Cowley, which caused far more delays than Dawlish, have now been completed. New culverts and diversion routes for flood water have now been built into the infrastructure and the benefits to the reliability of railway services will be huge.

The south west mainline has numerous issues contained within it. Apart from those mentioned we could consider the sole route into Cornwall via the single track of the Royal Albert Bridge. We can look at Cornwall signalling that is undergoing investments and upgrades. There are still sections in Cornwall of single track. Much needs to be considered in the years to come to improve the whole regions transport links.

Just about the biggest question that still remains both unanswered and outright ignored is the North Devon route. The benefits to the railway and those using it are potentially huge. Storms will still affect Dawlish without doubt. The Northern route could act as a reduced capacity diversion if ever required. As a stand alone project the demand is there. Residents of Okehampton, Tavistock and north Devon and Cornwall have been pleading for reinstatement for years. Development of these areas has created demand for better public transport and the reinstating of this route will open up huge swathes of an isolated area to businesses and residents alike.

The spending on public transport per head in the south west is amongst the lowest in the UK. This really needs to be addressed with more commitment from Government and the DfT about giving a fair and equal slice of the pie to the south west.

As part of Friday’s announcement of £2 Billion improvements were a number of road projects. The major improvements seem to be from the edges of the south west towards the London connection rather than within the heart of Devon or Cornwall. Plymouth did receive good news of a station upgrade and new roads too. Meanwhile new stations at Exeter and Torquay remain shelved for now. 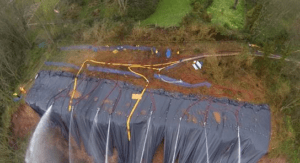 Drone view of the work between Holcombe and Teignmouth to wash away 20,000 tonnes of landslipped cliff.

We now await the commencement of the Dawlish works but the important decision and most vital part of the puzzle remains a secret until summer. The preferred option for the line through the tunnels and underneath the number one threat of the cliffs. Many rumours are circulating but the likely outcome could well be a mix of a smaller movement of the line toward the sea and a smaller regrading of the cliffs. The process will be open to far more scrutiny as it will require a Transport and Works act order.

The final part of resilience to be covered by Mr Grayling was the Voyager issue. For some reason the DfT feel as if the completed sea wall will cure the issue of this inappropriate train being used along the coastal line. Sea spray will still occur in spite of additional wave returns but more importantly, The likely timescale for the completion of improvements as far as Teignmouth is likely to be a number of years by which time a new franchise, with new appropriate rolling stock conditions, will have been awarded. The common belief is that with weeks we will indeed have another announcement of CrossCountry trains using additional HST sets with derogation allowance of PRM regulations allowed until end of franchise.