Open letter to all regarding Phase 1 Seawall Plans 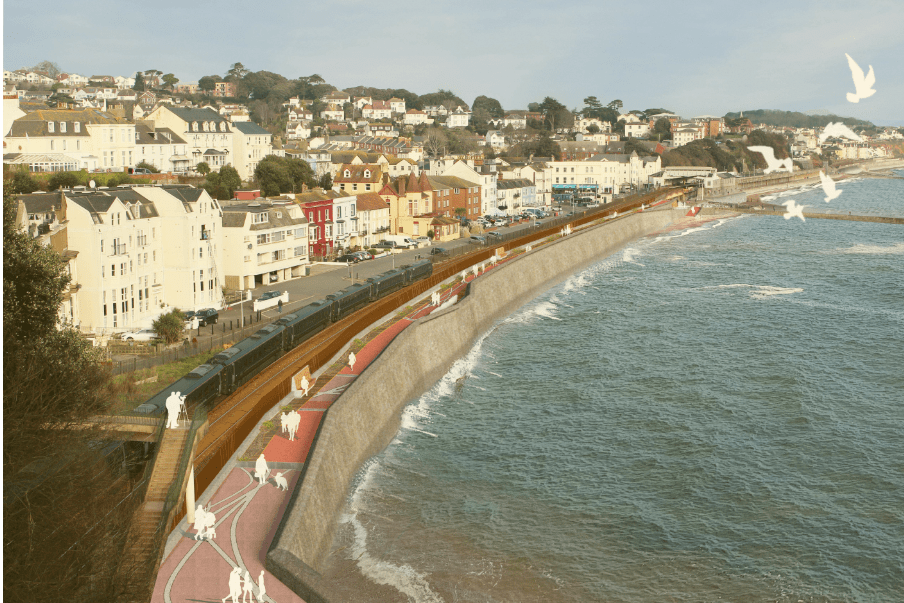 Whist supporting the resilience work to protect the South West Mainline through Dawlish and Teignmouth we feel it necessary to request a delay to the commencement of works regarding the section covered by Phase 1 from Kennaway Tunnel to Collanade Viaduct.

We have serious misgivings about the design of the proposed wall and very little information is being released by those responsible for the design itself.

The current plan due before Teignbridge Planning Committee on 16th April 2019 shows an increase in height of 2.5 metres. This is made up by raising the current footpath level by 1.4 Metres and an additional 1.1 metre concrete wall on the seaward side of the design which will incorporate a wave return feature.

These plans will see the footpath raised above the height of the current trackbed and will give a similar profile to Dawlish Station on the landward side. Dawlish Station has been the cause of the only weather related closures of the mainline since the collapse of 2014. The platform prevents the return of water to the Sea and then floods the trackbed. Once the water level exceeds the height of the railhead a line closure is enforced.

Our concerns with the proposed design is that a similar fate will be the result of this design. We are fully aware that the increase in height will not prevent overtopping when we experience an Easterly gale, around high tide with winds in excess of 40 mph. Waves are regularly photographed and filmed spraying over the top of Dawlish Station and we do not see how this could possibly be prevented.

On average, Dawlish experiences these conditions 3 or 4 times during a typical Winter season. The current design see’s the waves sent skywards and it is the spray that is then blown over by the strong winds. We believe that the current design will not prevent this phenomenon from occurring.

If you accept that to be true then the design preventing water from returning to the sea will infact now force the excess water across the track bed and will drain into Marine Parade. We believe we are likely to see many more flooding events in Marine Parade as well as more closures to the main line itself.

Could we ask for some assurances of significant drainage along the landward side of the footpath and the trackbed itself? Currently drainage systems within the station are incapable of draining fast enough.

The design has only just gone for testing. Arup, the designers, have released information this week to say the design has now been sent to water tanks for two months of testing. Surely this design, as a final design presented before planning committee’s and residents approval, should have been tested and completed before decisions were made? In view of this fact alone we believe any decision and commencement should be deferred until those tests are complete and a final design presented?

We are fully aware that nobody is entitled to a view. We respectfully request however that you make a considered decision on the likely impact on tourism to Dawlish.

Dawlish is unique. It has 180 years of history with the railway. Ask anyone in the UK what they know about Dawlish and they will say the railway and maybe the Black Swans. Why do people visit? For the majority, we believe it is for that open walk between the railway and the sea. This stretch of railway has to be one of the most photographed sections of railway in the entire Country.

Not only will the view from the land be hugely reduced but also the view from the beach and breakwaters of the line will be lost. No longer will we be able to attract visitors on a photography basis only when the line will be almost completely hidden from view. With a height of almost two Double Deckers from Beach to Parapet, the only viewable part of Dawlish we will be the sky.

Dawlish runs the risk of losing that uniqueness and heritage. It is likely to become another coastal town hemmed in behind a huge concrete wall with little appeal as a destination anymore. This will not only affect those visitors and businesses in Marine Parade but will affect the town as a whole.

We are not requesting that nothing is done. Far from it! We are requesting that the plans are reconsidered and are put to a proper public consultation rather than an information drop in session. We have one chance to get this right but it has to be right for Dawlish and not just the railway connection to Plymouth and Cornwall. This is our heritage and future.

The £80 Million pound funding by the Government is welcomed for Phases 1 & 2 but investment has also come from GWR with huge amounts invested in new trains to serve the region. Let us collectively support the railway as an entire concept for all of the South West whilst continuing to support local business and our tourism industry.