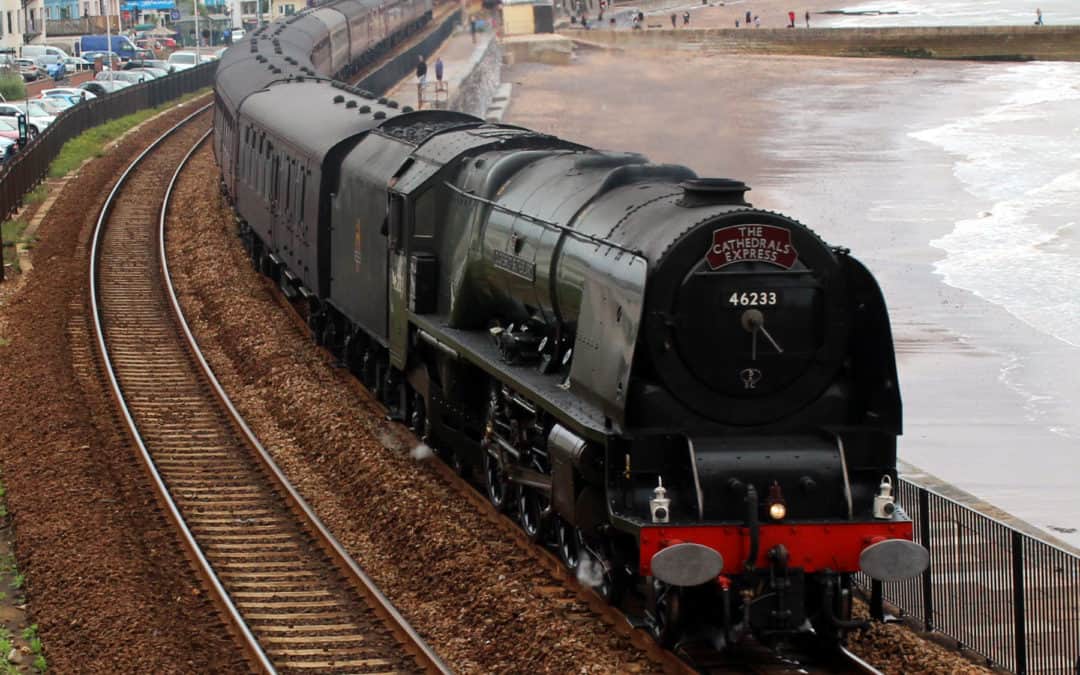 The tour round Britain last year unfortunately wasn’t routed through Devon and Cornwall but this year, starting from Paddington on Saturday 27th April, the tour pauses at Exeter from 2.01pm until 2.23pm and should then pass through Dawlish at 2.37pm on its way to Plymouth. The tour resumes on Sunday morning 28th April passing Dawlish at 10.37am and again pauses at Exeter St Davids from10.50am until 11.37am. From here it takes in Weston super Mare and Bristol before circling round Somerset passing Bath, Westbury, Frome and Taunton before taking the preserved West Somerset line to Minehead where it overnights. The locomotive powering this train is one of the most powerful express engines from the entire steam period in Britain and is LMS 6233 Duchess of Sutherland. Built at Crewe in 1938 it was one of the class that were never streamlined and is now running in the Crimson Lake livery that it carried when new. Originally with a single chimney until 1941 when it received a double chimney and in 1945 gained smoke deflectors, blinkers as us young trainspotters called them. Post war it was turned out in all black livery, coloured paint being hard to come by at that time. It eventually receiving BR Express Brunswick Green around the end of 1952. After working many years on the crack expresses from London to Glasgow such as the Royal Scot and The Caledonian  it was withdrawn from BR service in 1964 when it was bought by Billy Butlin and displayed at his Holiday Camp at Ayr in Scotland for about 10 years before being purchased by the Princess Royal Class Locomotive Trust and taken to the Midland Railway at Butterley in Derbyshire. Here with the aid of a heritage lottery fund matched by the Trust it was overhauled and returned to main line running in 2001. It has taken the place of B1 Mayflower on 4th May Cathedrals express to Kingswear so if you can’t make it this coming weekend all is not lost!