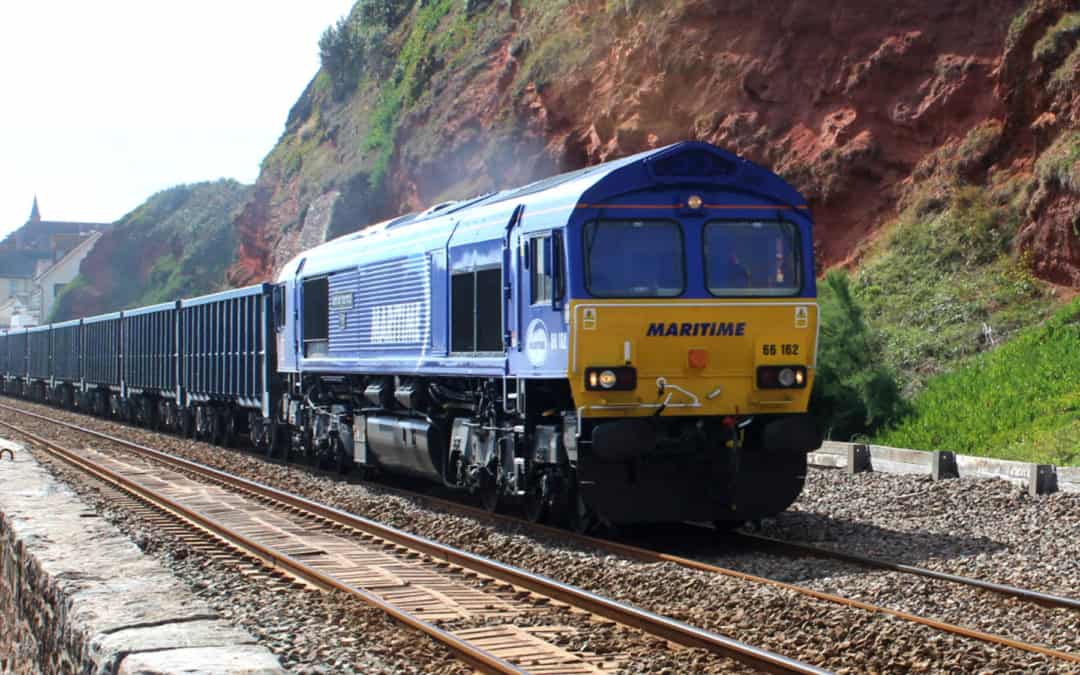 It’s been quite busy this past week with two specials over the weekend and a few freight locomotives to be seen. Saturday’s special was the Statesman Riviera Pullman from Nottingham to Kingswear which was top and tailed by Large logo Blue livery 47593 Galloway Princess and two tone Green livery 47501(D1944) Craftsman. Sunday’s steam  was 6233 Duchess of Sutherland on the Royal Duchy. There are only two more steam specials this year. It should be A4 60009 Union of South Africa this coming Sunday 8th Sept on the Torbay Express and the season ends the following weekend on Sunday 15th Sept with another visit of 6233 Duchess of Sutherland on the Royal Duchy. Unfortunately by then it will be dark by the time it returns around 8pm. It was bad enough for photography this weekend when it returned! No such problem for Nick at noon on Teignmouth sea wall. Colas 66850 David Maidment OBE passing through Teignmouth with a short rake of five Autoballaster wagons en route from Westbury to Westbury via Long Rock at Penzance early on Thursday evening. On Saturday evening Freightliner 66598 took a continuous welded rail train down to Penwithers Junction near Truro which appears on the video below. On it’s return on Saturday it fortunately passed Dawlish station just before the Royal Duchy came from the other direction which you may have seen on a previous video on Facebook.      The picture below is of DB Cargo 66125 on Dawlish Sea Wall with the first 10 loaded wagons containing Industrial sand which it is taking to Riverside Sidings at Exeter from Burngullow near St Austell. The loco will then return light engine to collect the second 10 wagons from Burngullow and join these to the 10 at Riverside before setting off for Bow in London. The reason it doesn’t bring them all together is because of the steep inclines over Dartmoor and the load of 20 would be too heavy to hold back should the brakes fail with it weighing 2000 tons. This sand gives a more pleasing sparkly hue to the mortar when used by the building trade and is being used extensively in the capital. The final item on the video was a further train of CWR  was the Westbury to Par top & tailed by GBRf 66711 named “Sence” in Aggregate Industries livery and Colas 66748 Wylam Dilly which Nick captured passing through Teignmouth station at 11.22 last night. It was supposed to return this morning at 7.32 but when I got up early to record it in daylight discovered it had passed through at 4.27am. Curses Moriarty!  ‘Project Sence’ is the name given to the new extension to Bardon Hill Quarry in Leicestershire which is close to the River Sence

The video begins with DB Cargo 66162 “Maritime Intermodals Five” blue livery on the sand contract looking smart with the blue wagons.  This was it’s first trip down to Devon in it’s new livery.