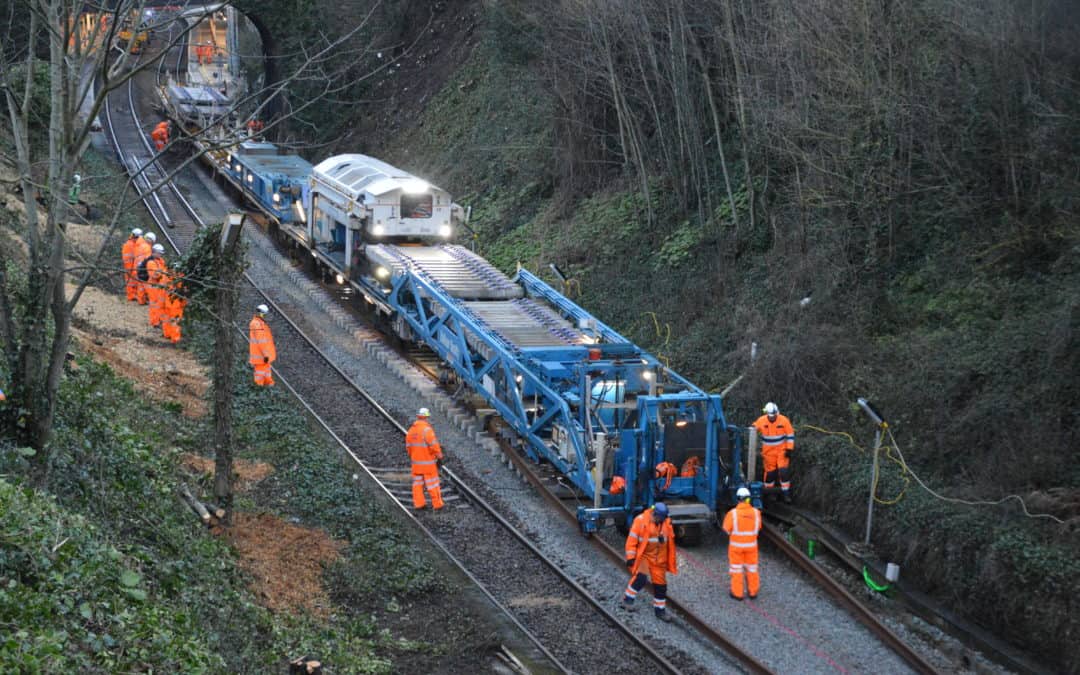 Photographs and video of the start of rail renewal at Teignmouth. The video begins with the train that carries the actual railing machine along with the sleeper supply and a rake of five autoballaster wagons passing through Teignmouth station earlier on Saturday evening which will return when the line is closed. Next comes a train loaded with sand and box wagons for loading scrap material. The video then shows the machine which is self propelling as it slowly passed through the station with the shuttle that loads the sleepers running back and forth. The video ends with the machine in operation as it moves along the prepared new ballast trackbed dropping sleepers in position and putting the rail on them as it moves along.

The photographs below show some of the other work that was being done. Not shown is the old track being removed and the old ballast dug up  and loaded onto a train and taken away. The trackbed first has a layer of sand  which is levelled and then covered with a weed control membrane. Next new ballast is tipped out of the JRA wagons that had been brought to Hackney Yard on Friday in readiness.This is levelled and marked out with a red line where the centre of the new track needs to be. The track machine has a steerable caterpillar tracked  powered device which is controlled by one of the workforce walking in front of it.

After the new track is ballasted the tamper comes along and beds it in and makes sure it is level.  It is amazing to see how it all comes together so efficiently.

It looks like rail on the Teignmouth sea wall will be replaced next Sunday and hopefully we will be able to get some footage of what was missed this week though no doubt a lot will take place under darkness.