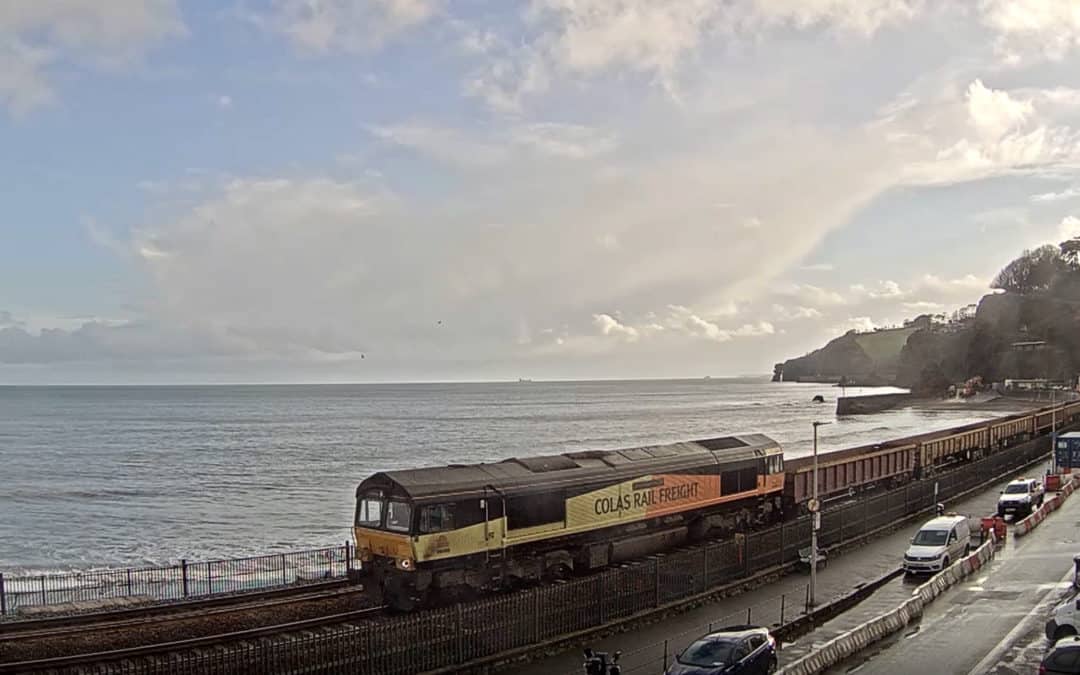 The last few days has seen a glut of engineering movements from Westbury to the far west of Cornwall between Truro and Penzance. The first train was on Thursday 13th with Colas 70805 heading a consist of box wagons with a Rail Vac machine in the centre. The train which was heading for St Blazey was in readiness for the weekend planned rail replacements. Unfortunately for the workforce they had to contend with storm Dennis over the weekend which can’t have made life easy! With railway lines closed by flooding in Devon it caused delays to the rail deliveries of materials and the returning spoils and consequently ran on an extra day or two. Most of the rail movements were in the evenings or late into the night so a lot of the footage in the video was taken by Nick Campbell who braved the elements to record several of the trains as they passed through Teignmouth. There were a couple of first times of locos in liveries that had not been seen here at Dawlish before. Freightliner 66528 named  “Madge Elliot MBE – Borders Railway Opening 2015” was in Powerhaul livery and the other was Freightliner 66623  which was previously in blue and named “Bill Bolsover” but is now in the bright orange livery of the American Genesee & Wyoming Company who are part of the Freighliner Group. Unfortunately this loco passed first  in the middle of the night and when it returned through Teignmouth, Nick’s view was obscured by an IET travelling in the opposite direction.He was not amused! Consequently we have no record of it, as yet. The video begins with what will probably be the last empty stock movement from Laira to storage at Long Marston. ROG (Rail Operations Group) had sent down from their Leicester depot 57312 on Sunday 9th with two Barrier cars to Laira and on Monday delivered a rake of MK3 HST coaches to Long Marston. It returned on Tuesday as shown in the video and took another set of MK3 coaches to Long Marston on Wednesday morning which we filmed from the Rockstone Bridge, sorry about the wind noise. It was the prelude to storm Dennis. Locos on video are 66850 66528 66197 66847 66562 66111 66712 66566 70805 + 57312