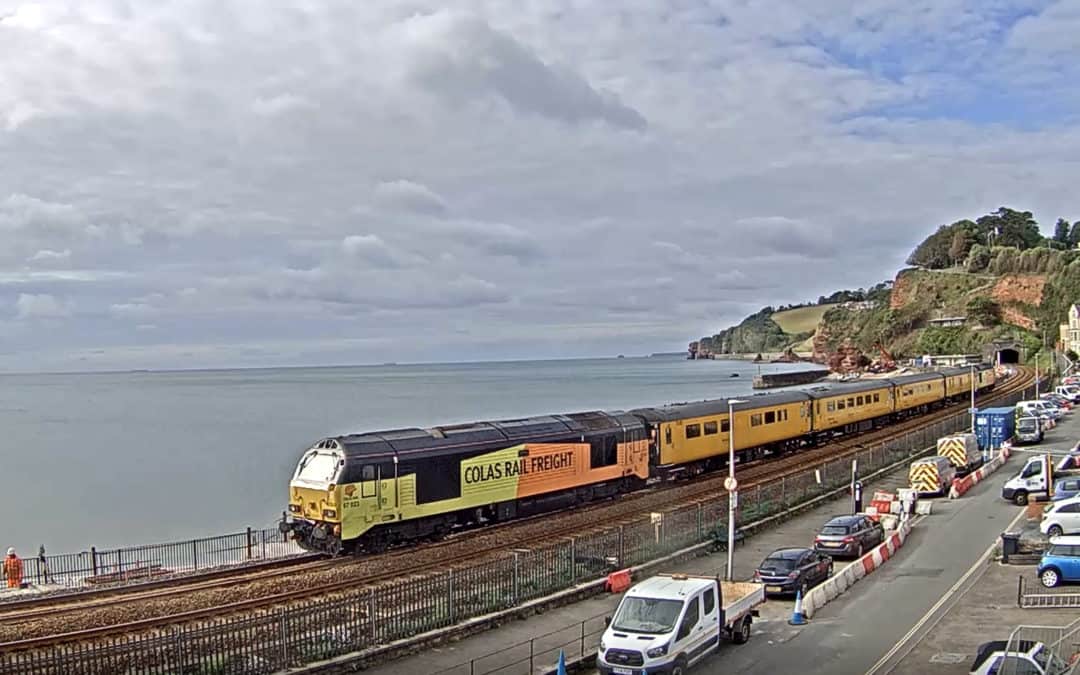 The day saw two track machines, an empty coaching stock sleeper train and the stand-in for the usual Network Rail HST test train pass through Dawlish. The stone blower is a machine that levels trackwork in situ to make the riding qualities more comfortable and safer. It was travelling from Liskeard to Gloucester Horton Rd depot after working in Cornwall, The other track Machine DR 73905 which is a Switch and Crossing Tamper was on its journey from Swindon to Par. The test train was worked by Colas 67027 “Charlotte” and 67023 “Stella” in top and tail formation.The roster for the day is to test the lines as it travels from Reading to Penzance, then back as far as Dawlish Warren where it reverses again and goes to Paignton. Then it reverses direction and travels via Taunton and finally on back to Reading Triangle sidings.  I understand it comes as far as Dawlish Warren to turn as it is too congested at Newton Abbot or Teignmouth to fit in with the passenger service trains. This explains why on the video below you see it 4 times! The sleeper train is not currently in use as the Night Riviera service has been suspended because the dreaded virus. The locomotive powering it was GWR 57603 “Tintagel Castle” being a little over 2 hours late leaving Reading and then had problems near Lostwithiel where it had to be rescued by 57605 which fortunately was on shed at Long Rock, The train finally got to Penzance just over five and a hour hour late. Good job there were no passengers on it!