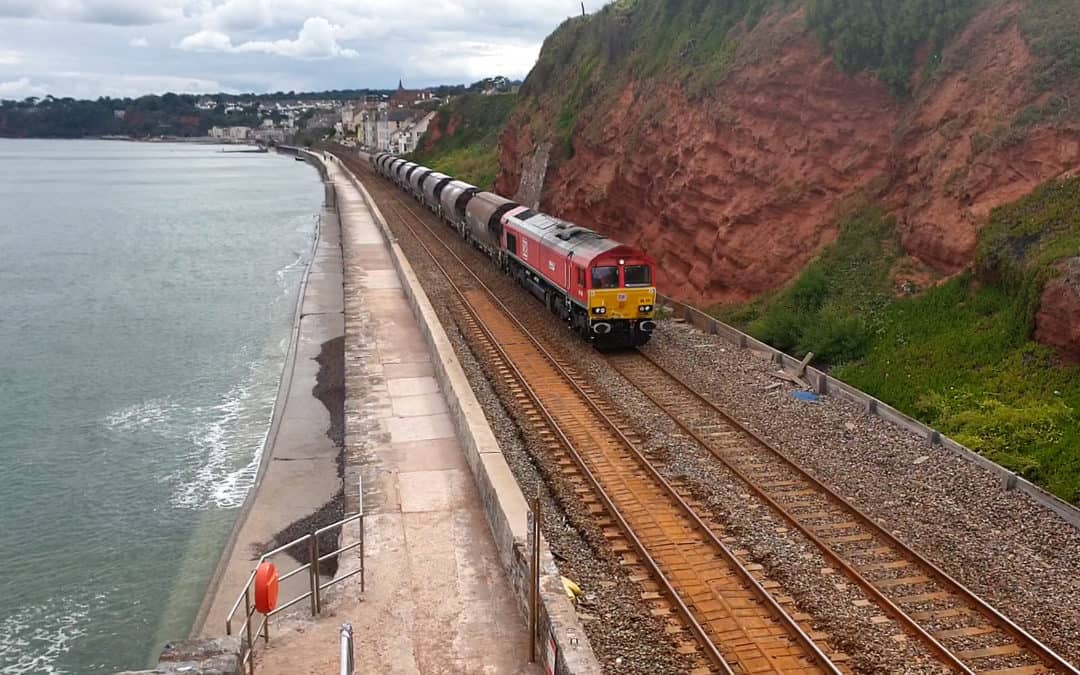 There has been plenty of interesting loco hauled trains this week. The HOBC, High Output Ballast Cleaner has been working from Monday to Thursday travelling along the sea wall en route to Totnes where it reverses and sets off on the up line to the worksite between Totnes and Newton Abbot. It returns to its base at Fairwater Yard at Taunton in the night. Like last week the locos top and tailing it were Freightliner 66414 & 66596. The train consist is very long and heavy being over 2000 tons and makes quite a noise as it thunders through at approx 60 mph. It has been reported that this train will be working on the West Somerset Preserved railway this next week. The spent ballast that it has collected is offloaded at the end of that railway and used as aggregate for building site use.During the day the train is split and half of it goes off to Westbury to be filled with new ballast for the next night’s working. On Wednesday morning the cement train from Aberthaw near Cardiff to Moorswater near Liskeard passes along the sea wall  in the early morning and the empties return through on Thursday mid morning. Colas 70810 was the loco this week with 20 PCA tanks, The high spot for most was the clay train which this week was hauled by newly named DB Cargo 66175 “Rail Riders Express”. In normal times the train has approx 20 JAI tank wagons but since the pandemic has dwindled to 10 or less as industry up in the Potteries has dwindled. The empty wagons pass Dawlish in the very early hours of Wednesday and the loaded train on its way back up to Bescot passes Dawlish at about 5.20pm on Thursdays. Last but not least on this post is the regular Friday 4 weekly test train. Standing in for the normal National Rail HST “flying banana” was Colas 67027 “Charlotte” and 67023 “Stella” with an unusual rake consisting of 2 yellow and 2 blue coaches. Quite a colourful site with the locos livery of  yellow, orange and black! The video starts with the clay train passing under the Shaldon bridge on the Teign Estuary at Teignmouth. Other scenes in the video are the cutting near Teignmouth station and on the sea wall, the rest being filmed along Dawlish sea wall. Thanks to Noel Downie who sent in this picture taken at South Brent on Dartmoor.