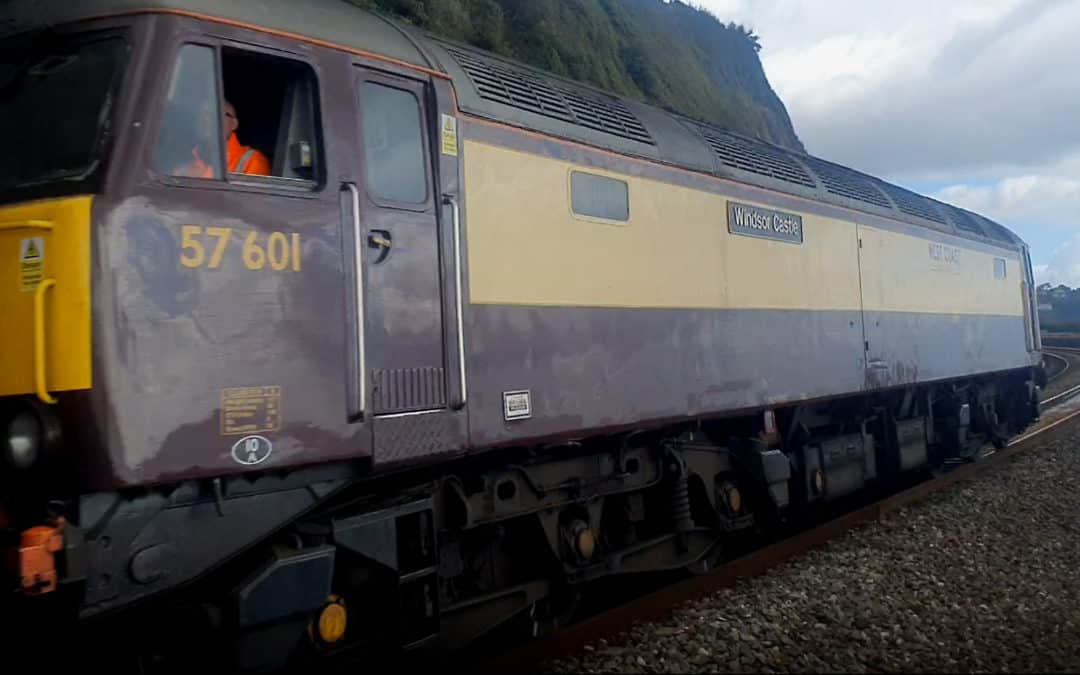 A busy Saturday for trains on the sea wall. Main interest was the passing of the luxurious Northern Belle Pullman train which was on a day tour from Swansea to Torquay. Headed by 57316 now unnamed, but called FAB1 (which was Lady Penelope’s 6 wheeled Rolls Royce) when it was a Virgin Thunderbird. On the down run  the locomotive on the rear was 57601, now in Pullman livery to match the coaches and named Windsor Castle. When this loco changed from being a class 47 to 57 it was in the striking livery of Porterbrook and nicknamed Purple Ronnie by the rail fans. The video shows its progress through the area from when it was held in Dawlish Warren station to enable the Leeds to Plymouth HST Cross Country express to pass it and the return working seen from Teignmouth as far as it heading for Langstone rock on the Dawlish sea wall. The video continues showing the two class 20’s of Loram Rail returning to Derby from Plymouth on their driver route learning trip. Leading loco 20142 is in the smart livery of London Transport which was the first time to be seen  at Dawlish. Just one more “special train” to come this year which is a weekend trip from York to Penzance coming down on Friday 25th and returning on Sunday 27th September. It is diesel hauled by Class 47 or 57 and is titled the Cornish Riviera Statesman. 2022 Calendars now available for pre-order with a free Waterfowl badge if you order all three!

Take a look...
We use cookies on our website to give you the most relevant experience by remembering your preferences and repeat visits. By clicking “Accept”, you consent to the use of ALL the cookies.
Cookie settingsACCEPT
Manage consent