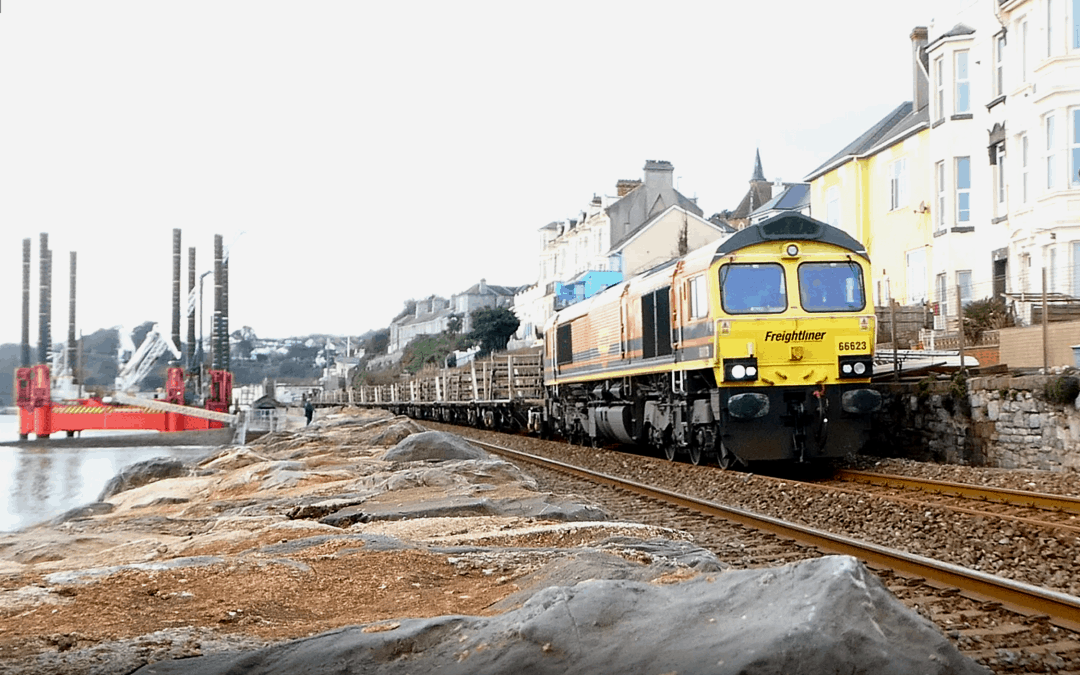 A busy week on the railway with having six infrastructure trains travelling from Westbury to St Erth from where the branch line to St.Ives is having a lot of the track renewed. Fortunately the outward and empty returns have been in the daytime whereas normally they pass through in the dark hours. Five have been  carrying ten autoballaster consists and then the last one with continuous welded rail. The first on Monday had a problem with one of the brakes on a wagon and the train had to leave one of the permanently fixed rake of five wagons in Hackney Yard at Newton Abbot. Since then it has been repaired and is due to be collected later this week.Otherwise all ran smoothly with the down loads passing Dawlish in the afternoon and the empty returns in late morning.The Monday to Friday consists were all autoballasters. Loco’s top & tailing were all DB Cargo numbers 66059 66125 66020 66167 66107 & finally 66077. This loco is named Benjamin Gimbert GC who was an LNER driver who was posthumously awarded the George Cross after heroically saving a disaster occurring at Soham in Norfolk when an ammunition train he was driving caught fire in 1944. The last train to pass was 66023 which had formerly been named Bill Bolsover but is now in Freightliner’s Genesee & Wyoming orange livery. The video  also includes one of what has replaced the Class 143 units, a 166/1 Rolls Royce Turbo powered 3-car unit which includes a first class compartment. The 165’s have entered service in the west country and being employed on Barnstaple-Exmouth services and Exmouth to Paignton and include some driver training non public familiarisation runs. On Friday the stand in test train top & tailed by Colas 67023 & 67027 performed the usual route of Reading to Paignton via Penzance and back to Dawlish Warren before taking the Torquay branch at Newton Abbot. It then goes from Paignton to Taunton and onward to Paddington and finally back to base at Derby.