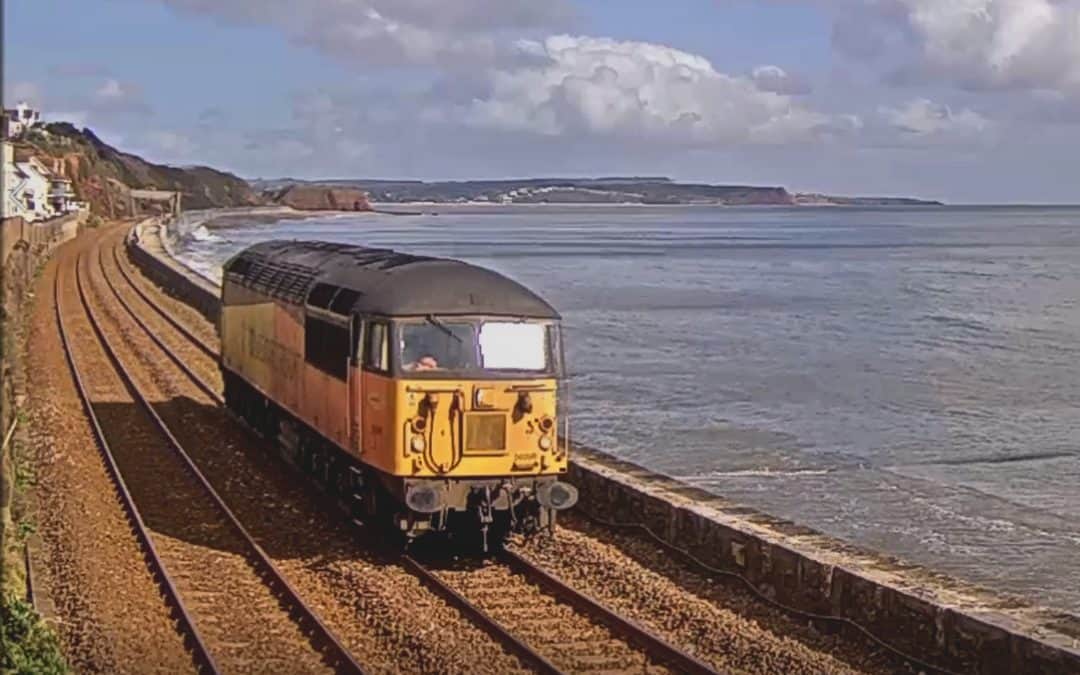 Yet another wet and windy week making life difficult with the salty spray affecting the web cams earlier on in the week but fortunately coming up trumps towards the end when we said farewell to the Wavewalker which has dominated the Dawlish scene for the past three months. Sad news was that the first of the steam specials we were hoping to see passing through Dawlish this year has been the cancellation of the Great Britain 1XV tour featuring LMS 6233 Duchess of Sutherland on 22nd of April, proving impossible with the conditions of the Covid Roadmap. At this time of writing the South Devon Explorer from Woking to Plymouth on 29th May with 60163 Tornado is still on, along with the new HST Midland Pullman on the same day with a trip from Eastleigh to Penzance. Earlier on May 3rd the Midland Pullman has a fully booked trip from Peterborough to Kingswear. Let us hope for no returning Covid restrictions by then. On Wednesday afternoon this week DB Cargo 66034 had engine problems bringing the first portion of the china clay tanker train up to Exeter and had to recess in Hemerdon loop before restarting it’s journey. It then failed near Dainton Tunnel blocking the up line for over 3 hours causing the up line passenger train services to be curtailed at Totnes. The Cornish based 66116 was sent up from St Blazey to assist and the top and tailed ensemble is shown in the video below as it passed through Teignmouth station. There is then a short clip of the two locomotives returning to St. Austell passing through after leaving the eleven tanks at Riverside sidings. Later in the video 66034 is shown passing under the Shaldon bridge at Teignmouth with the remaining five tank wagons to make up the full trainload at Exeter before setting off for the Potteries at Bescot. The video continues with a very rare visit of a Class 56 locomotive Colas 56090 coming down to collect six log wagons which had been stored in Hackney yard at Newton Abbot for several months. Another locomotive on Thursday was DB Cargo 66150 which came down light engine from Westbury to St. Blazey. This loco is using HVO ( Hydro-treated Vegetable oil) which has been determined to cause only 5% loss of power but reduces a train’s carbon emissions by up to 90% compared to red diesel. The engine needs no alterations and the two fuels can be mixed. Not sure you want to be putting your chip pan oil into your diesel car just yet though! This coming week the Cornish main line will be closed Monday to Friday between St. Austell and Truro and it looks like there will be 8 infrastructure trains from Westbury and a couple of track machines from Bristol heading for Cornwall passing through Dawlish during tomorrow night.  (Sunday evening from 7.13pm through Dawlish). Hopefully some will come back in daylight so we can bring you some footage.