The birth of Dawlish as a seaside resort 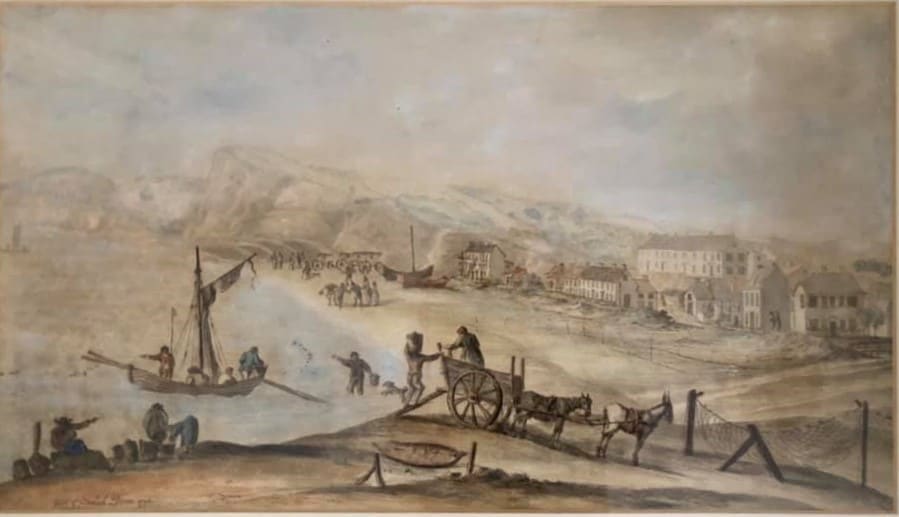 By the time Brunel’s railway came through Dawlish in 1846, Dawlish had already established itself as a seaside resort and watering place for wealthy Georgians and Victorians. This was in no small part thanks to King George 111, who reigned from 1760 until 1820. He extolled the restorative virtues of fresh sea air for wealthy people living in the industrial Midlands and North. Of course, it was only the wealthy who were able to travel and were able to take holidays. Workers in the fields and factories were not entitled to any time off until the early years of the 20th century.

So it was that seaside villages and towns like Dawlish were discovered by the landed gentry. Taking the air, sea bathing and even drinking seawater became popular from the latter part of the 18th century, as an escape from the factories that belched out smoke and pollution from their chimneys.

Dawlish at this time was not easy to reach. There was no stagecoach service until 1810 as the roads in and out of the small town were steep and the route to Exeter was pot-holed and marshy. People wanting to travel to Dawlish would take the Exeter to Plymouth stagecoach to Chudleigh and then transfer to horse and cart, which travelled over Little Haldon. It was almost inaccessible by private carriage.

The first few houses of any size, suitable as holiday accommodation for wealthy visitors, were in Plantation Terrace and Marine Parade, and date from the 1780’s. The first hotel built in Dawlish was the London Hotel, which stood at the bottom of the Strand (where the Co-op now stands).

So, what did the tiny town have to offer visitors in 1800? Well, apart from the beach there was nothing at all. What we now call the Lawn was, in fact, a marshy tidal inlet known as Tunnicliffe Waste. There was no sanitation at this time, so waste of every description was thrown into the river by the residents who lived between the seafront and the church. Thus, the smell that filled the town, particularly in summer, must have been putrid.

One man realised the potential that Dawlish had to offer to these wealthy visitors. This was John Edye Manning, who bought the Manor of Dawlish in around 1805. He set about straightening the Brook and draining the marshy land adjacent to it. He raised the level of the ground by about a metre and created the pleasure gardens, which are still such a feature of the town today.

Next, he built cottages at the back of the town for the poor fishing folk who lived in old tumbledown cottages along the Strand. In their place, he built fashionable town houses and villas for wealthy visitors to rent for the summer season or to buy as holiday homes. There were no shops at this time. There would have been a weekly market and traders going from street to street.  Manning was also responsible for building Public Reading Rooms and Public Baths on the seafront. There was no electricity, drainage or mains water until the 1870’s.

This upturn in the fortunes of the town led to better road access and a stagecoach service from Exeter in 1810, which encouraged more visitors for daytrips from Exeter and tourists from afar. This in turn led to increased employment for the local population. Instead of fishing and agriculture being the only sources of employment, hotel workers, servants, builders, cooks, bakers, sedan chair carriers, hat-makers etc were in great demand. Dawlish found itself on the map.

Martin Dunsford, a merchant who travelled through the Westcountry in 1800 described Dawlish as follows: “The church and the old village is situated about a mile from the sea… To gratify the rage of fashion and of pleasure now, the great inducement of families to live in summer at the seaside, though probably originating from the claims of sickness or infirmity or economy, a new town has arisen within a few years from the marshy vale near the shore, perhaps the most pleasant and elegant of any of the accustomed watering places in this County. It is built in the form of an amphitheatre facing the sea; the houses have neat little flower gardens installed before them. A small rivulet from adjacent hills runs through the middle of this almost circular town, much like a canal, and sinks at its extremities into the sand. I never spent a week more agreeably than in this place.’

I wrote that John Edye Manning straightened the Brook as if it was an easy undertaking. However, the Stream (as it was then known) meandered across the width of the Lawn and containing it to flow like a canal was no easy undertaking, particularly as there was no mechanical means at the time. It involved hundreds of locals, who were tenants of Manning, to alter the flow of the water, create a canal, then divert the water along the canal. He then had to raise the level of the surrounding land with soil and stones. How he did this is the subject of one of the chapters in “Eavesdropper – Dawlish Tales of Long Ago”, my book of short stories about the town.