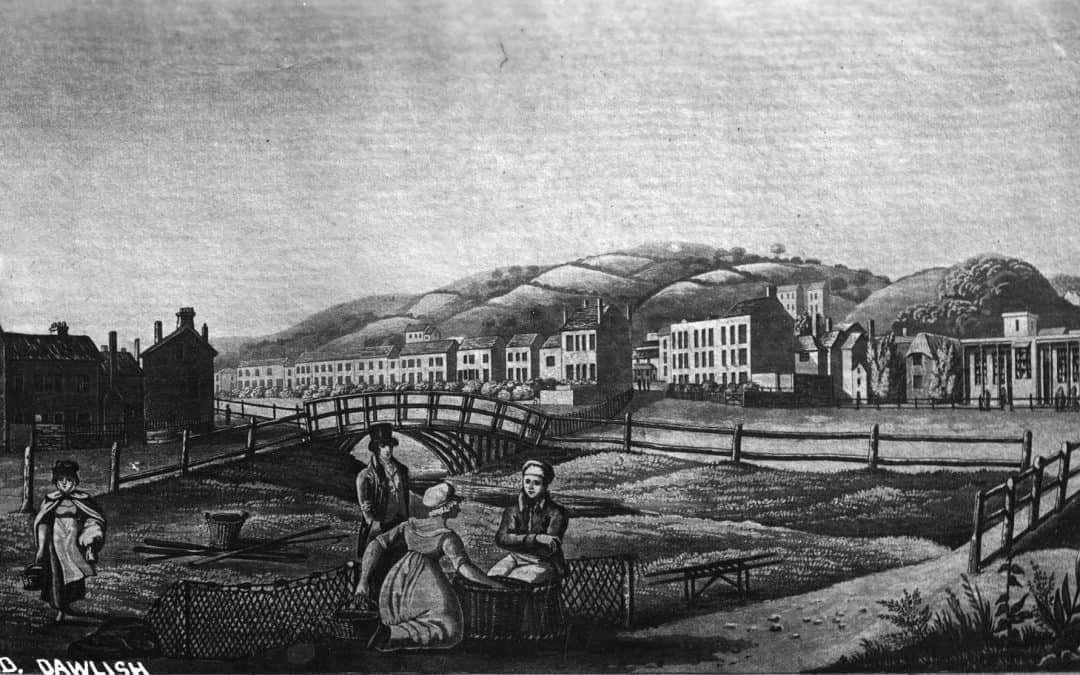 Here is my latest offering about the tales in my book of short stories about the past in Dawlish, “Eavesdropper – Dawlish Tales from Long Ago.” Those of you who have been following the tales will remember that, so far, I have witnessed adventures in 1840, 1740, 1640 and 1940.

For the next adventure, I decided to go out on a limb and make up a story where the year was not relevant to the story. It would go back to a time where we have very sparse knowledge of the people who inhabited the area: Iron Age warriors!

I have always had an enormous interest in our parish church, St Gregory’s. For a start, it is by far the oldest building in the town and, secondly, the lives of nearly everyone who has lived in Dawlish, have been touched by the church in some fashion.

It has always been my belief that there has been a religious building on the site of the church for about 1500 years or, to put it another way, back to Anglo-Saxon times. After all, St Gregory was a Saxon Pope in the 6th century, whose aim was to convert Britons to Catholicism. The first written evidence of a church in Dawlish comes in 1072, so a gap of 500 years when there must have been several chapels or churches built, either of cob or wood. No trace is left unless there is evidence beneath the present church. We will never know for sure.

However, I wanted to take man’s habitation of the area back even further. One of my favourite walks is through the woods at the top of Luscombe Hill. As many Dawlish people know, there is a circular enclosure here, known as Castle Dyke. If you drive along the road, it’s easy to miss it but, if you park the car and walk to the right, there is an enclosure about 100 metres across, surrounded by a mound of mud and stone, as well as a ditch. It is a very serene place and nobody knows for sure its real origin.

What is known though, is that it lies close to ancient trackways from Exeter, Dawlish, Teignmouth, Bishopsteignton, Kingsteignton, Newton Abbot and Chudleigh. All roads seem to converge there. This points to it being an Iron Age market or trading place. Its size means that it could also have been a small settlement. This conjecture is strengthened by the fact that it lies at the highest point for miles around, which meant that anyone living there could see people (friend or foe) approaching from any direction. Trees would have been cleared for the same purpose.

I imagine there was a palisade of wooden stakes on top of the mound to act as shelter, but also for defence in case of attack by other tribes. England was a lawless place at the time. It was with this background that I began to create a story of an attack by a hostile tribe. It is obviously complete fiction, but I would like to think that something like this tale could have happened a few hundred years before the birth of Jesus Christ! If you want to know what happens, you’ll have to buy the book!

I’ve been asked why there would have been a settlement on Little Haldon, which is exposed to all weathers, has poor soil and is always a few degrees colder than in the town itself? The simple answer is defence. They were hardy people and would have dressed in animal skins or woollen clothing. By living at the highest point in the area, they could see their enemies approaching.

It was only later, when defence was less important, that the settlers would have moved into the valley where there was fresh water from the Brook, fertile soil for crops, surrounding hills for shelter from the weather and the sea teeming with fish. Even so, the village they created was a mile inland to provide shelter from easterly storms and to remain hidden from marauding pirates and Vikings patrolling the waters. Now, there’s a subject for another tale!

Photo credit with thanks Dawlish Museum