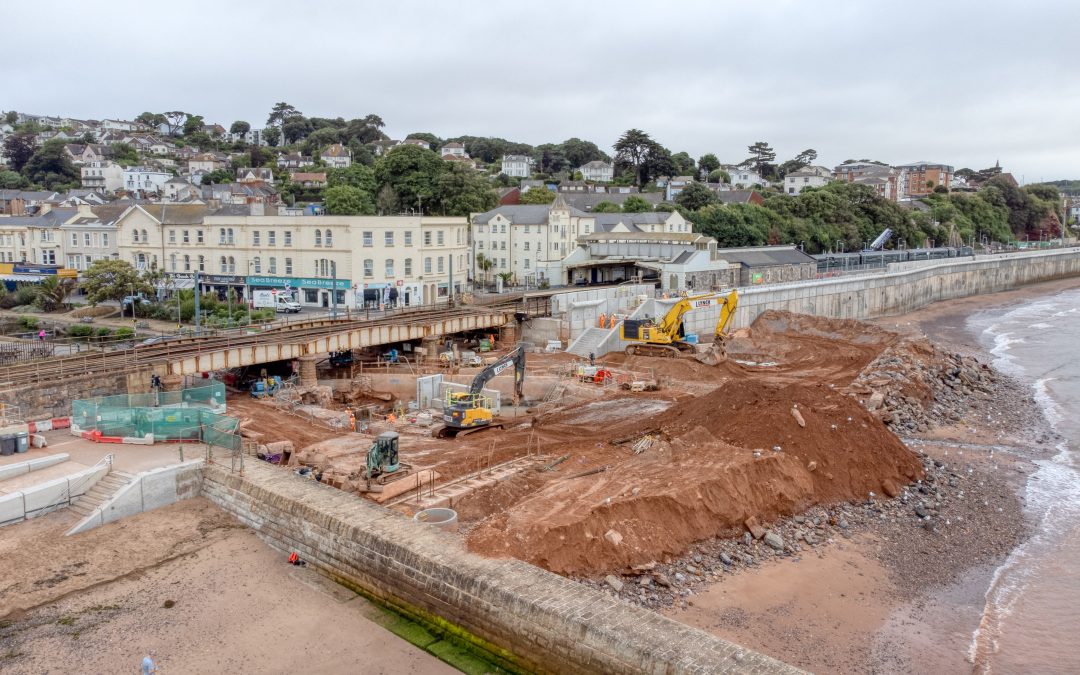 The railway through Dawlish is now better protected as construction of the new, bigger sea wall has reached another major milestone.

Video at the bottom of the page.

The installation of all 164 wall panels and 168 recurve units which return waves back out to sea is now complete. This innovative design coupled with the increased height of the new sea wall will help reduce delays and disruption to passengers by minimising the likelihood of the tracks flooding and allowing the line to reopen more quickly after major storms.

Following the significant progress made installing the wall panels and recurve units, Network Rail and its contractors BAM Nuttall are now fully focused on completing the remaining elements of this major project. This includes building the link bridge that will connect the two sections of public, accessible promenade and completing work on the new stilling basin, where Dawlish Water runs into the sea.

The remaining elements of this project are now expected to be finished in December. This is due to the discovery of an uncharted gas main in June which delayed piling to install foundations for the new link bridge close to Colonnade viaduct.

In the meantime, every effort will continue to be made to allow access to the King’s Walk promenade and beach at Colonnade underpass when it is safe to do so.

The final part of the project will see the construction of a new, accessible footbridge with lifts at Dawlish station, meaning any passengers, residents or visitors will be able to enjoy easy step-free access at the station for the first time. Work is due to start later this year, with the bridge due to open next summer.

Ewen Morrison, Network Rail senior programme manager, said: “Achieving resilience for the railway is a major milestone not just for Network Rail, but for our passengers, the town of Dawlish and the southwest region as a whole. It’s what we set out to do when we were awarded £80m of funding from the Department of Transport back in 2019.

“This landmark moment is testament to the hard work and coordination of staff from Network Rail and our contractors BAM Nuttall, who have worked under extremely challenging conditions around the tides and through the seasons as well as during the Covid pandemic.

“We would like to thank everyone for their continued patience and understanding while we complete the work as quickly and safely as possible.

“As we near completion of the sea wall, it’s exciting to know the positive impact this project will have in Dawlish, which will provide greater protection to the railway from rising sea levels and extreme weather for generations to come.”

The new sea wall at Dawlish is part of Network Rail’s ongoing efforts since 2014 to improve the resilience of the railway between Dawlish and Teignmouth in Devon, known as the South West Rail Resilience Programme (SWRRP).